Most king crab is delivered live to shore-based processors and cooked while live and then brine frozen; some king crab is processed on board catcher processors. Some buyers say that shore-based processors use more fresh water than fishermen who process onboard, resulting in a less salty product. Glaze for king crab should be 3-5% so it’s recommended that periodic glaze tests be done on crab legs to make sure you’re not paying for water. Be sure to check that the count is correct; king crab are graded by the number of walking legs per 10 pounds. Hence, a 20-pound box of 9/12 count king crab should contain 18 - 24 walking legs. Industry standard king crab packs contain 1.5 pounds of "broken" crab per 20lb. box. 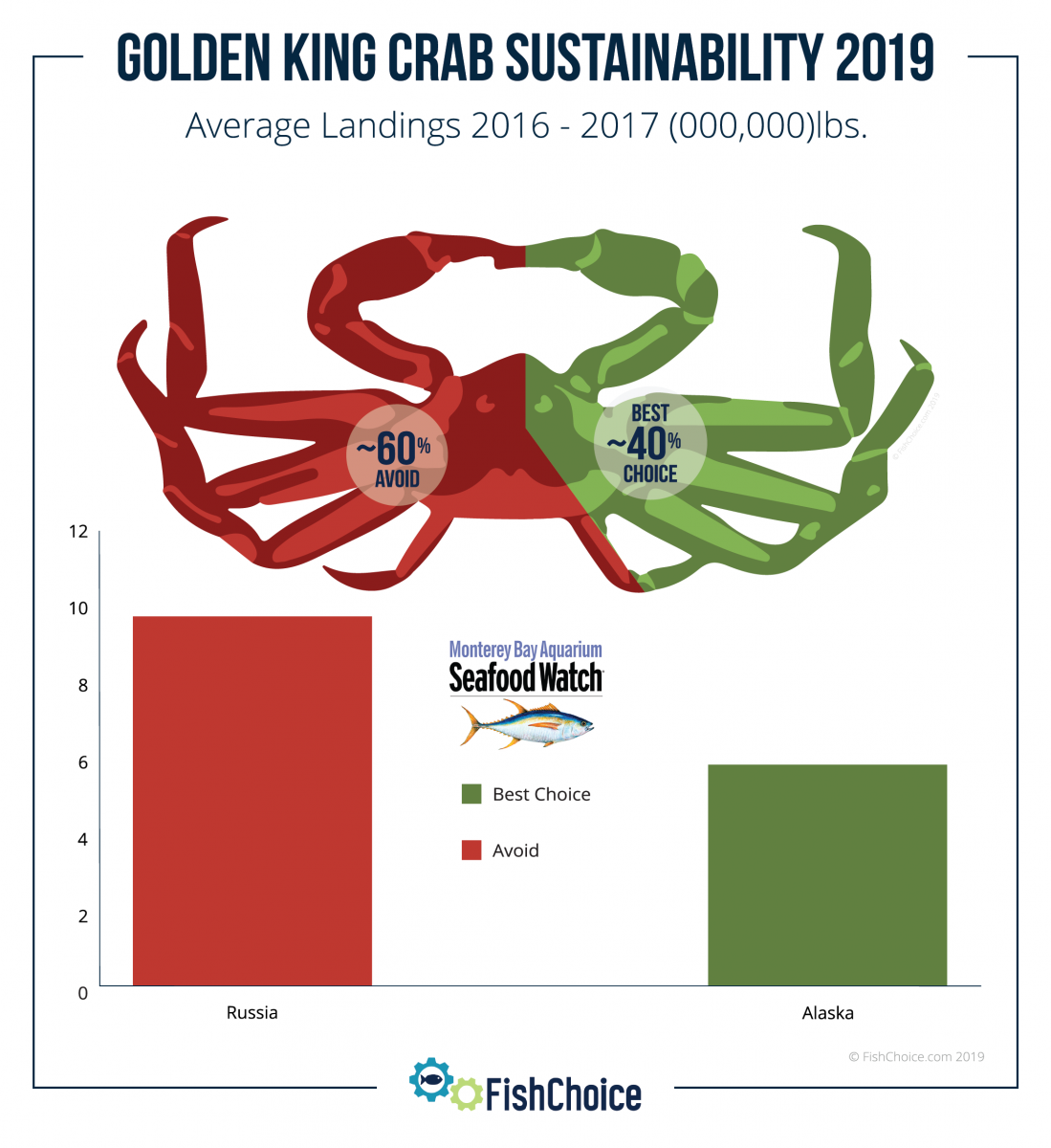 Key sustainability sourcing notes based on average landings of golden king crab from 2016-17 and using the most recent Seafood Watch assessments as of October, 2019, is as follows:

Golden king crabs are decapod crustaceans. Their shells, which are mainly made from calcium, are golden orange in color. The crabs must molt their shells in order to grow. The molting process occurs many times throughout the first few years of a crab’s life, but the process slows down as a crab matures. Golden king crabs have five pairs of legs and the front pair of legs has claws at the end. Golden king crabs are smaller in size when compared to red and blue king crabs — they usually weigh between five to eight pounds.

Golden king crabs have a 20-month asynchronous reproductive cycle. Females must molt in order to mate. They will release between 10,000 and 30,000 eggs per mating cycle. Golden king crab eggs are larger than both red and blue king crabs’ eggs. Adult female golden king crabs brood thousands of embryos underneath their tail flaps for about a year. When the embryos have developed, they hatch as swimming larvae. The larvae will settle to the ocean bottom where they will remain as they grow into adults.

Golden king crabs are opportunistic feeders and eat a variety of species including worms, clams, mussels, snails, brittle and sea stars, sea urchins, sand dollars, barnacles, crabs and other crustaceans, fish parts, sponges, and algae. Golden king crabs are preyed upon by a number of marine organisms such as Pacific cod, halibut, yellowfin sole, sea otters, and other king crabs.

Golden king crabs range from British Columbia to Alaska, and across the Pacific Ocean to Japan. In Alaska, significant populations occur off the Aleutian Islands, Pribilof and Shumagin Islands, Shelikof Strait, Prince William Sound, and in the lower Chatham Strait. Golden king crabs inhabit waters at depths between 984 and 3281 feet (300 and 1000 meters). While their range may overlap with other king crabs, they seldom co-exist as they inhabit deeper waters than red or blue king crabs. Golden king crabs occur over hard bottoms, steep rocky slopes, narrow ledges, and high-relief habitats – usually avoiding open sand areas. They are often found near complex habitats provided by sponges, corals, sea whips, and boulders. Adult golden king crabs conduct an annual migration where they move into shallower waters in the late winter to molt and mate. Adults will then move back into deep-water feeding grounds in the spring after they have molted and mated (all females must molt to mate, but males may not and may keep their shell for one or two years). Adults segregate by sex once they leave their molting/mating grounds.

Little research has been conducted on golden king crabs. Additional studies are needed to better understand the basic biology and life history of this crab species. Researchers with the Alaska Fisheries Science Center (AFSC) at the Kodiak Lab are currently studying the embryonic and larval development of golden king crabs as well as the effects of temperature and density on survival and growth of larvae. Researchers are also examining the potential effects of ocean acidification on adult female crabs. Additionally, the AFSC has a project that focuses on estimating golden king crab (along with snow crab and southern Tanner crab) handling mortality.

NOAA Fisheries, the North Pacific Fishery Management Council, and the Alaska Department of Fish and Game manage the US golden king crab fishery under the Fishery Management Plan (FMP) for Bering Sea/Aleutian Islands King and Tanner Crabs. The FMP defers management of Alaskan crab fisheries to the State of Alaska. Under federal oversight, all Alaska state regulations must comply with the FMP, the Magnuson-Stevens Act, and other applicable federal laws. Historically, golden king crab were first caught as incidental catch in the red king crab fishery. The first commercial landings for golden king crab occurred in 1975, but it was only until 1981, that a targeted pot fishery was developed. The primary fishery for golden king crab occurs in the Aleutian Islands – with localized areas in the Bering Sea and Gulf of Alaska accounting for only minor catches. Up until 1996, the Aleutian Islands were managed as two different management areas, Adak and Dutch Harbor; however, they are now managed as one called “Dutch Harbor Area O.” Within Dutch Harbor Area O there are two separate stocks – the Sequam and Adak stocks – that are actively managed.

Each year, fishery managers set the harvest limit for the next golden king crab fishing season using annual abundance estimates collected by the National Marine Fishery Service (NMFS). The NMFS, along with the Alaska Department of Fish and Game, prepares and reviews an annual stock assessment and fishery evaluation (SAFE) report for each king crab fishery. The SAFE report summarizes historic and current abundance, the economic status of the fisheries, total allowable catch (TAC) limits, and season-opening dates as well as generates harvest and stock projections for the upcoming fishing season. Individual shares or quotas are then allocated among harvesters, processors, and coastal communities through the Crab Rationalization Program. This program limits commercial access, therefore, reducing fishing capacity. During the fishing season, fishery managers monitor vessels and catch in real time and can close the fishery once harvest limits are met or exceeded. The Crab Rationalization Program also includes a Community Development Quota allowing local communities the opportunity to purchase shares in the fishery before they go on sale. These shares can account for up to ten percent of the TAC.

Other management measures for golden king crab include:

The Federal Agency for Fishery (Rosrybolovstvo) is the federal agency responsible for fisheries and conservation of marine biological resources in Russia. Historically, king crabs have been overfished in Russia.  While a total allowable catch limit is established for king crabs, there are significant issues of illegal, unreported, and unregulated (IUU) fishing occurring in the fishery and as such, total landings are thought to exceed the established TAC limit.

King crabs are found in the North Pacific Ocean and primarily fished in Alaska and Russia. They are relatively slow to mature, making them vulnerable to fishing pressure. A 2015 assessment of Aleutian Islands golden king crab indicated that the stock is healthy and the crab are being fished at a sustainable level, according to Seafood Watch.

In Russia, king crab have been historically overfished and area closures have not been effective in the face of continued illegal, unreported and unregulated fishing. Seafood Watch warned that Russia’s commercially important crab stocks, which include golden king crab, have the potential to collapse.

King crab is mainly caught using pot and trap gear. Large baited wire pots are usually deposited on soft, muddy sea bottoms and make contact with a smaller area of the seafloor than mobile gear. This causes less damage, according to Seafood Watch. Management strategies are also in place in the United States that further reduce habitat impacts.

In Alaska, pots targeting golden king crab can incidentally catch a range of fish and invertebrates including octopus, Pacific cod, sponges, sea stars, and coral. However, overall bycatch is very low and the species caught are not of conservation concern, Seafood Watch reported in 2015. Management measures for U.S. king crab include restrictions on gear and fishing areas that reduce bycatch. Pots are required to have minimum mesh size limits as well as degradable escape or timed release mechanisms to prevent ghost fishing.