Wahoo, aka "ono," is available year-round fresh or frozen with product forms including whole, fillets, steaks, and H&G. Although wahoo is a member of the mackerel family, its flesh is white, mild, and has a taste comparable to albacore. The shelf life of fresh ono is relatively short. For freshness, raw wahoo meat should be pinkish orange, the gills clean, and the eyes bright and clear. Because the flesh of wahoo is lean, moist cooking preparations like poaching work well. When cooked, wahoo is flakier and whiter than other open-ocean species like swordfish. 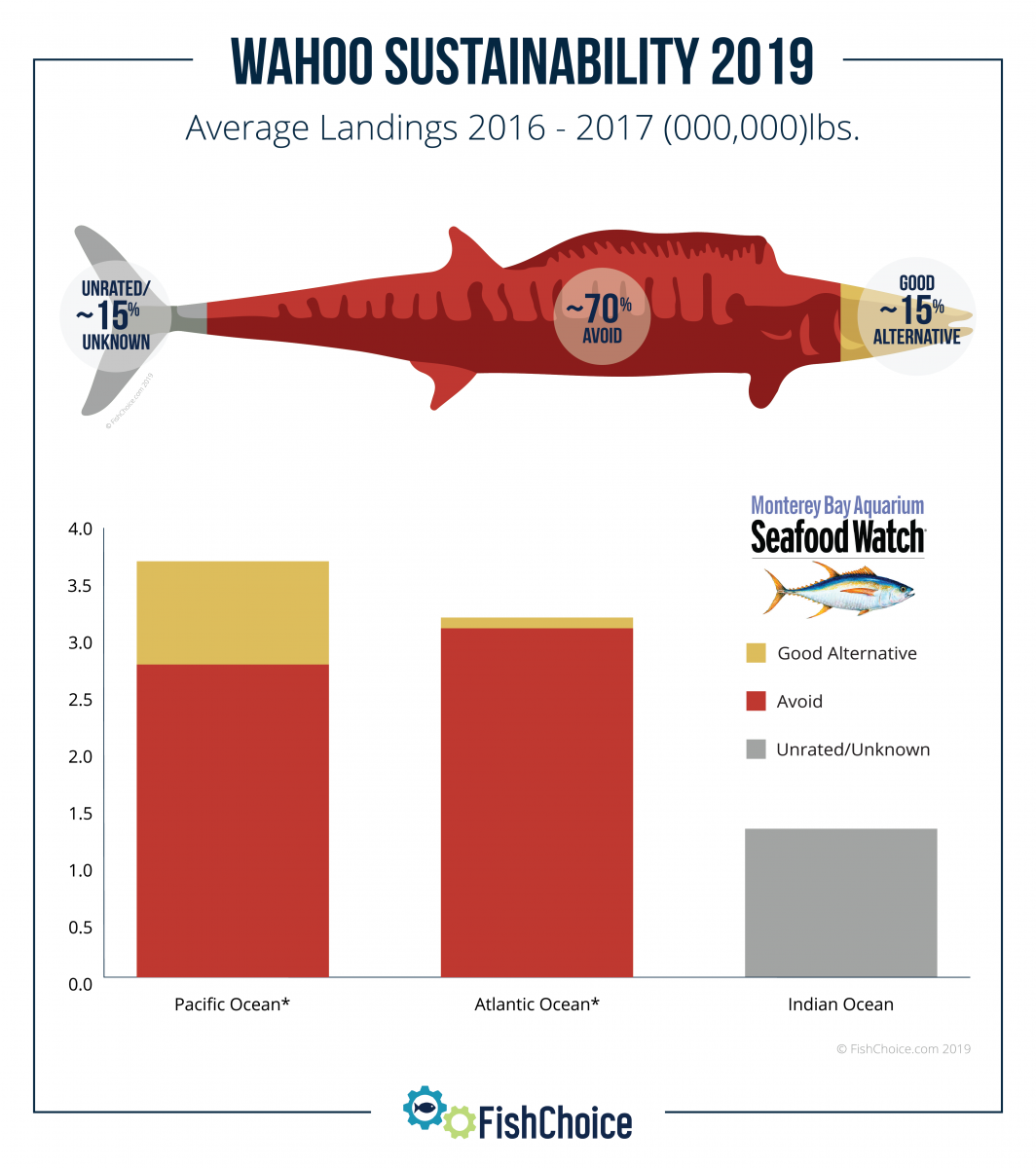 Based on average global* landings of wahoo from 2016-2017 and using the most recent Seafood Watch ratings as of September, 2019, the sustainability breakdown of wahoo is as follows:

Wahoo are the largest member of the mackerel family. They grow quickly, averaging between 3.3 and 5.4 feet in length (one and 1.7 meters) with the largest recorded catch weighing 158.5 pounds and being eight feet in length (2.4 meters). They have a particularly long snout, accounting for more than half their head length, and they do not have gill rakers. Wahoo have a short life span, living to five or six years old.

Males reach maturity at 2.8 feet in length (0.85 meters), and females at 3.3 feet (one meter), usually around one year old. Spawning season lasts from May to August in the northern hemisphere, peaking in June. There is little data about the spawning season in the southern hemisphere and equatorial zone, though it is believed they spawn year-round. During peak spawning season, wahoo spawn every one to nine days, averaging about five days in between each spawning batch. Females produce between 500,000 and 6 million eggs per spawning event.

Wahoo are a big fish with a large jaw, and are able to swim at speeds greater than 48 miles per hour (78 km per hour). Wahoo are top predators, feeding primarily on fish and squid, using their sharp teeth to turn larger prey into bite-size pieces. Because of their lack of gill rakers, they are unable to prey on small prey items such as crustaceans. A variety of predators prey on wahoo.

Wahoo are found in the Atlantic, Indian, and Pacific Oceans in tropical and subtropical waters. Wahoo also inhabit both the Caribbean and Mediterranean Sea. They live in the open ocean near the surface in the epipelagic zone (also known as the euphotic zone) where sunlight easily penetrates throughout the day. They may also inhabit areas near banks, pinnacles, and natural, drifting debris. Wahoo are frequently found solitary or forming small, loose groups – rather than compact schools. Little is known about wahoo migration habits; however, they are found in tropical waters year-round and are also known to move into higher latitudes during the summer months.

Research on age, growth, and reproductive biology of wahoo, while extensive, is over 20 years old and lacks quantitative information required for stock assessments. There is a lack of small or juvenile fish samples, limiting the ability to effectively estimate growth parameters and maturity-at-age information. There is also very little information on the Pacific Ocean and southern hemisphere stocks.

Previous research has outlined wahoo diet in various regions; however, quantitative dietary information is needed to assess both the long-term and short-term effects of commercial fishing and climate change. Future research should investigate consumption and digestion rates of wahoo. This research would ultimately inform ecosystem models and facilitate ecosystem-based fisheries management.

The Dolphin and Wahoo Fishery Management Plan identifies several knowledge deficits regarding the biology and stock status of mahi-mahi and wahoo in the Atlantic exclusive economic zone and makes the following recommendations for future research:

As of yet it is unclear whether any there are any research programs underway to address these deficits.

A 2012 study done by scientists at Florida Atlantic University, and a 2010 collaborative study by scientists at the Pfleger Institute of Environmental Research, Scripps Institution of Oceanography, University of Massachusetts at Dartmouth and the Centro Interdisciplinario de Ciencias Marinas-IPN looked at wahoo movements and depth and temperature distributions. They found that depth varied between day and night for each fish; however, a majority of them made regular dives to depths greater than 656 feet (200 meters). This research broadens scientists’ understandings of pelagic ecosystems, and suggests potential interactions of wahoo with other pelagic fish, many of which are commercially important. The combination of high site-specific recapture rates and seasonal site preferences suggest that wahoo may be vulnerable to commercial and recreational operations, especially those that repeatedly target the same location and time period. Behavioral information may also help increase fishing gear specificity and alter catch compositions.

NOAA Fisheries and the South Atlantic Fishery Management Council – in cooperation with the Mid-Atlantic and the New England Fishery Management Councils – manage the US Atlantic wahoo fishery under the Dolphin and Wahoo Fishery Management Plan (FMP). Effective as of 2004, the FMP and its amendments provide a precautionary and risk-averse approach to management by ensuring no new fisheries develop for mahi-mahi and wahoo. The intended effects of the FMP are to conserve and manage US Atlantic stocks of mahi-mahi and wahoo by setting harvest restrictions for both the commercial and recreational sectors (with the recreational sector receiving a significant majority of catch allocation). Among measures the plan establishes are:

State wildlife and fisheries agencies, the US Coast Guard, and NOAA enforce compliance with the FMP. Regulations within state-managed waters are compatible with those established in the FMP and this is particularly the case in the state managed waters off Florida. There are currently no management measures in place for wahoo in the Gulf of Mexico.

NOAA Fisheries and the Western Pacific Fishery Management Council manage the Pacific wahoo fishery in the western Pacific under the Fishery Ecosystem Plan for Pacific Pelagic Fisheries of the Western Pacific Region (FEP). The majority (about 90 percent) of the US wahoo harvest occurs in the Pacific, mainly Hawaii, and is covered under the 2009 FEP. According to 2011 data, the majority of the Hawaiian catch is landed primarily by troll (60 percent) and longline gear (37 percent). The FEP and its amendments do not establish specific management measures for wahoo as current trends indicate that regulations are not necessary. Instead, the FEP establishes measures that apply to all troll and longline fisheries operating in the region. Among these measures are

NOAA Fisheries and the Pacific Coast Fishery Management Council manage the wahoo fishery off the US West Coast under the FMP for US West Coast Fisheries for Highly Migratory Species. The FMP intends to ensure the conservation and promotion of the optimum yield of highly migratory species both within and outside the US Exclusive Economic Zone (EEZ). Wahoo are included in this plan as a monitored species as they are occasionally a non-targeted catch from another fishery operating in the region.

Wahoo, found worldwide in tropical and warm temperate seas, are highly fecund and fast growing, which make them fairly resistant to fishing pressure. The stock status and fishing mortality rates for wahoo are generally not known in the U.S. Atlantic, Pacific or Gulf of Mexico. Although the U.S. National Marine Fisheries Service estimates that wahoo population levels are stable, there is a lack of information about the species.

The majority of wahoo are caught using hook-and-line or longlines. Trolling surface lures are used to catch wahoo in the South Atlantic, which has little effect on habitat. Environmental impacts from the wahoo fishery are considered to be minimal because the gear types do not touch the seafloor.

Wahoo are often caught as bycatch. With wahoo, the bycatch includes dolphin and tunas as well as low numbers of sailfish and white and blue marlin, according to the U.S. National Marine Fisheries Service. Most U.S. wahoo are caught in Hawaii using longlines and trolls that are targeting tuna. Although accidental albatross and shark captures in the Hawaiian longline fishery have been a problem, management measurements in recent years have successfully reduced such incidents. The use of circle hooks in Hawaiian fisheries has greatly reduced turtle and shark bycatch.

In the Gulf of Mexico, wahoo are unregulated so there are no bycatch reduction management measures in place. Managers there and in the Caribbean are currently considering developing fishery management plans for wahoo. Wahoo fall under a fishery management plan in the U.S. Pacific but the species is monitored, not managed there. Currently there are no size restrictions on wahoo caught in U.S. waters. In 2003, the South Atlantic Fishery Management Council protected an essential seaweed habitat for wahoo from commercial harvest. However, scientific wahoo monitoring has not been done and no efforts are planned.