Most U.S. brown shrimp are caught between August through May, and are usually available frozen as tail meat year-round. Brown shrimp is low in saturated fat and is a very good source of selenium and vitamin B12. Random tests are recommended to ensure that the shrimp that arrives is actually what was ordered. Buyer Beware: Peeled brown shrimp may be treated with sodium tripolyphosphate to add moisture, but too much will make the shrimp appear translucent and give them a soapy feel. Many fishermen prevent black spots on shells by using bisodium sulfates but overuse causes pitting on the shells. 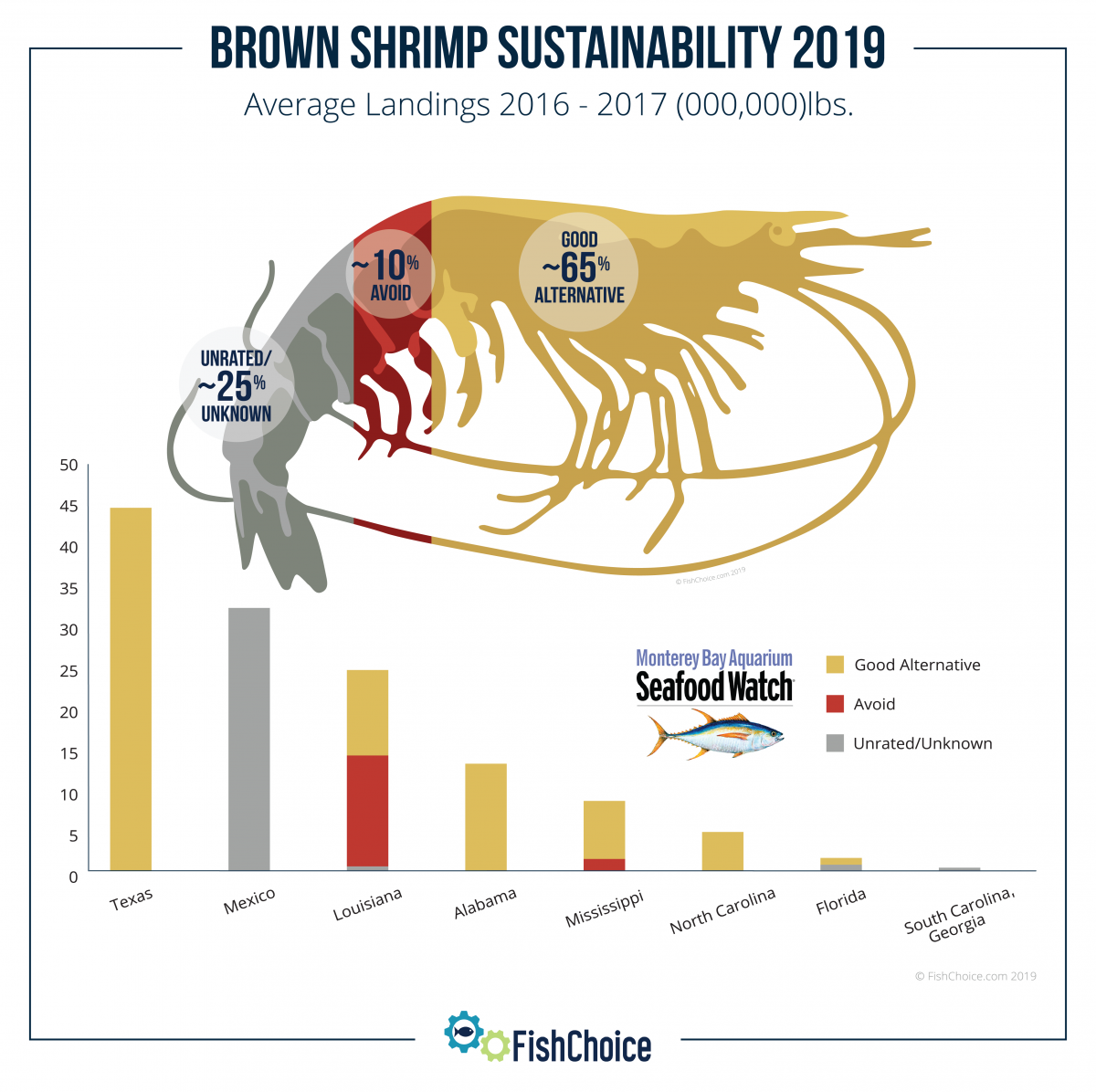 Brown shrimp have a grooved shell backing, and a well-developed rostrum that extends to or beyond the outer edges of their eyes. Their tails are green or red with a red-purple band wrapping around it. Brown shrimp can reach up to seven inches (18 cm) in length, but their growth is dependent on environmental factors such as water temperature and salinity. Females typically grow larger than males. Brown shrimp are able to reproduce when they reach about five or six inches (12 to 15 cm) in length. They have a short life span, usually less than two years.

Spawning happens in deep water throughout the year, but peaks in spring and summer. Females release between 500,000 to one million eggs near the ocean floor that then float in the water column. The hatched shrimp develop into larvae within two to three weeks and move into estuarine nurseries. Several weeks later, they begin developing swimming and walking legs, allowing them to forage and graze for specific foods. Changes in water temperature and salinity stimulate the mature shrimp’s migration out of the estuary. Once out at sea, the adult shrimp continues to grow on the ocean floor until a sharp increase in the water temperature stimulates another spawning season.

Brown shrimp are found along the Atlantic coast of North America from Martha’s Vineyard, Massachusetts to the Florida Keys and throughout the Gulf of Mexico to northwestern Yucatan in Mexico. The majority of the US brown shrimp harvest occurs in the Gulf of Mexico – mainly from Louisiana and Texas. Juveniles tend to inhabit more inshore, estuarine waters where they prefer shallower water with muddy and peaty bottoms made up of clay, sand, or broken shells. As they grow and mature into adults, they will migrate further offshore to deeper, saltier waters where they prefer soft silt, mud, or sand bottoms. Brown shrimp are more active at night and will burrow into the seafloor during the day. They inhabit waters between 10 and 180 feet (three and 55 meters) deep, but are known to concentrate in depths between 98 and 164 feet (30 and 50 meters) deep. Some brown shrimp have been reported at depths as great as 540 feet (164 meters).

NOAA’s Southeast Fisheries Science Center manages shrimp research. The Annual Economic Survey of Federal Gulf and Atlantic Shrimp Permit Holders is currently conducting research about operating expenses and costs of owning and maintaining shrimp vessels. The information is gathered in order to assess trends in the financial and economic state of the shrimp fisheries, and the economic and social effects of regulations on these fisheries. The Gulf Shrimp System provides an overview of procedures used to collect fishery statistics for the shrimp fisheries in the Gulf of Mexico. The end goal is to provide catch, value, area caught, and effort data for commercial fishing trips.

The Oceanic Institute is involved in multiple projects related to shrimp aquaculture and farming, including: developing a pedigree database for their breeding program in order to generate information about shrimp genetics, producing specific pathogen free and genetically improved transgenic shrimp, and the US Marine Shrimp Farming Program which conducts selective breeding research.

NOAA Fisheries and the South Atlantic Fishery Management Council manage the brown shrimp fishery in federal waters off the US South Atlantic (North and South Carolina, Georgia, and Florida (east coast)) under the Shrimp Fishery Management Plan (FMP). In federal waters, the Shrimp FMP originally established a maximum sustainable yield for the fishery, provided South Atlantic states the ability to request closures after deep winter freezes (to protect surviving populations), and established gear restrictions (no trawling is allowed with mesh less than 4 inches wide seaward to 25 nautical miles). Subsequent amendments to the South Atlantic Shrimp FMP have included measures that:

Among other measures the South Atlantic Shrimp FMP addresses are permit requirements, mandatory trip reports, and onboard observers (if selected) to collect data on harvest and bycatch.

State resource management agencies are responsible for management of brown shrimp in state waters in the Gulf of Mexico and specific management measures can vary state to state. For instance, Texas does not allow the use of skimmer trawls and Florida requires all skimmer trawls be equipped with TEDs; however, this is not the case for other Gulf States. While all otter trawls operating in the US Gulf of Mexico are required to use TEDs in accordance to measures outlined in the ESA; skimmer trawls are currently exempt from this requirement if they operate with alternative tow-time restrictions – meaning that trawl times cannot exceed a 55 or 75 minutes (depending on location) during specific times the year. Other measures to address bycatch, such as the use of BRDs vary depending on the state. According to a 2016 stock assessment brown shrimp in the Gulf of Mexico are not overfished, nor subject to overfishing.

In Mexico, the brown shrimp fishery is managed by a network of federal agencies including: the Secretaría de Agrucultura, Ganadería, Desarrollo Rural, Pesca y Alimentación (SAGARPA, the Secretary of Agriculture, Livestock, Rural Development, Fisheries and Food), the Comisión Nacional de Acuacultura y Pesca (CONAPESCA, the National Commission of Aquaculture and Fisheries), and the Instituto Nacional de Pesca (INAPESCA, National Fisheries Institute). The overall goal of these agencies is to promote the long-term sustainability, conservation, and protection of natural resources. Among the measures these different agencies put in place to manage various Mexican shrimp fisheries include:

Although they are short-lived, brown shrimp are highly fecund, which allows them to rebound quickly from environmental factors such as unfavorable salinity and substrate levels that can have a negative impact. Brown shrimp populations, found along the southeastern U.S. from Massachusetts to the Gulf of Mexico, are currently healthy and harvested at sustainable levels. Some brown shrimp stocks in Mexico are increasing. However brown shrimp in the Gulf of Tehuantepec is at risk for overfishing so Seafood Watch labeled it as a moderate concern.

Shrimp are primarily caught using otter trawls that maximize contact with the seafloor. This type of trawl can harm marine organisms, disturb sediment, lower sea grass production, and cause an increase in algal blooms. However, most shrimp trawling occurs in muddy, sandy areas that are resilient to trawling. The overall effect of trawling on the habitat is a moderate concern in this fishery.

Thousands of sea turtles are caught in shrimp trawls annually in the U.S. Atlantic and Gulf of Mexico. U.S. shrimpers are required to use bycatch reduction devices and turtle extruder devices. Compliance is good in the southeast Atlantic coast fishery, but not yet at 100%. In addition, the brown shrimp fishery is one of the main causes of mortality in Gulf of Mexico red snapper, which has been overfished for decades. Other species of concern include endangered smalltooth sawfish, endangered Atlantic sturgeon and overfished blacknosed shark.

Despite the use of turtle extruder devices, sea turtle populations in the United States remain endangered or threatened. Commercial fisheries are working on reducing red snapper bycatch through time-area closures and bycatch reduction devices. Observer coverage in the shrimp fishery continues to be low. Management measures include permit requirements, a moratorium on new permits issued, area closures, and some data collection through logbooks. In Mexico, a number of bycatch reduction programs have been created but no targets have been set.