Southern tanner crab, often marketed as 'snow crab,' is roughly twice the size of C. opilio snow crab with an average size of 3 to 5 lbs. compared to 1.5 to 2.5 lbs. respectively. Southern tanner crab is known as being one of the best crabs on the market, but landings are typically much less than snow crab landings. Most 'snow crab' sections will be packed with some broken legs in the box and should be checked for excess glaze and broken pieces—the industry standard for broken pieces is 10%. Snow crabs are usually sold as sections or “clusters” (4 walking legs and a claw arm), typically graded 3/5 oz., 5/8 oz. and 8 ups; with 5/8 oz. sections compromising the bulk of the production. The meat yield from southern tanner crab is ~20% compared to  ~17% for opilio and ~25% in king and Dungeness. The dirty brown barnacle-covered shells of older snow crab shells may look unappetizing but can have higher meat content, making them a good bargain, according to some buyers. 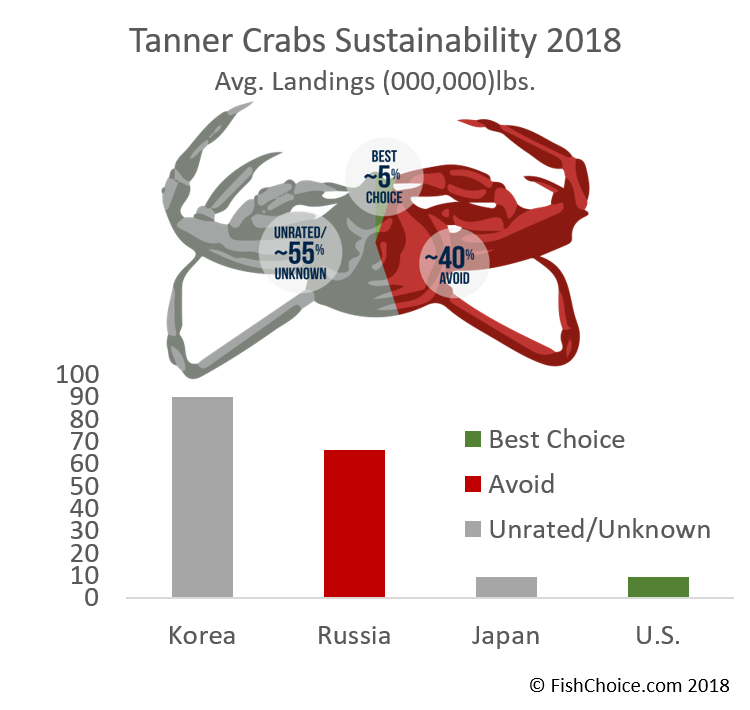 Key sustainability sourcing notes for southern tanner crab based on landings from 2010-2015/2016 and the most recent 2015 (Alaska and Russia) Seafood Watch assessments are as follows:

Southern Tanner crabs are large spider crabs that have a body composed mainly of a chitinous shell with a small abdominal flap. The shell is round and flattened with two small “horns” jutting out from the front, near their eyes. The species is an orange-brown color on the top of its shell and a more pink-cream color on the underside. They are decapods and have five pairs of legs. The frontmost pair of legs is equipped with pincers. Tanner crabs can reach up to 20 cm in width and can weigh up to four pounds. Tanner crabs can live for over a decade.

When female crabs first reach sexual maturity, they will mate in solitary pairings in shallow water. Older females will form mating aggregations (sometimes referred to as pods) that can contain hundreds of crabs. These pods are thought to provide protection from predators and attract male crabs for mating. The mating period lasts from January through June and does not necessarily occur every year because females can retain viable sperm in spermathecae (a receptacle used to store sperm after mating) for up to two years. Females can carry clusters of eggs upwards of 400,000 for around a year.

Fertilization occurs internally and females incubate the fertilized eggs on their abdominal flap. Larvae usually hatch between April and June. They are free-swimming and molt several times, growing through each distinct stage. Growth of the larvae can depend on water temperature. About 60-70 days after they’ve hatched, the larvae will lose their ability to swim and will settle on the ocean bottom where they will grow and live as adults.

A Tanner crab’s diet varies depending on its life stage. Larval crabs mostly feed on phytoplankton while juveniles and adults are opportunistic feeders and will eat almost anything, including bivalves, shrimp, fish, and even other crabs. Smaller individuals are preyed upon by fish, seals, sea otters, and octopus.

Tanner crabs inhabit the northern Pacific Ocean, including the Bering Sea and the Gulf of Alaska, where they range from the Kamchatka Peninsula in the west to Bristol Bay, Alaska in the east. They are found as far south as Hokkaido, Japan in the western Pacific, and as far south as Oregon in the eastern Pacific. Tanner crabs prefer soft sandy or muddy bottoms where they can bury themselves. They are also found on gravel in shallow waters. Tanner crabs can occupy a range of depths depending on their life history stages. They can be found at subtidal depths down to 1,434 feet (437 meters). Juveniles are found in shallower water than adults with both sexes occupying a similar depth throughout the year. Once juveniles near adulthood, the sexes will separate and remain so until the reproductive season. Tanner crab migrations are not well known, but both sexes will move to water deeper than (100 meters) after reaching maturity and mating for the first time. Adult males will occupy a larger bathymetric range than females.

With funding from National Marine Fisheries Service, research is being conducted to study the relationships between juvenile Tanner crabs and worm tube habitat in the waters off of Kodiak, Alaska. In addition, another study is examining crab reflexes in relation to predicting bycatch-related mortality. Pathiobiology studies are also looking into various diseases that affect crab populations, including the Tanner crab, such as black matt disease, fungal infections, and Bitter Crab Syndrome. This syndrome has a 100 percent fatality rate for certain crab species in the North Pacific and is caused by a currently undescribed dinoflagellate.

A collaborative research project between the Marine Conservation Alliance Foundation and the Alaska Fisheries Science Center is quantifying unobserved injury and mortality of crabs resulting from encounters with bottom trawls. Another project getting underway will look at potential effects of ocean acidification on Tanner crab embryo development and larvae survival.

Tanner crabs are managed under a cooperative partnership between the National Marine Fisheries Service (NMFS) and the Alaska Department of Fish and Game (ADFG). Joint management of Tanner crabs is established under the federal Fishery Management Plan (FMP) for the Commercial King and Tanner Crab Fisheries in the Bering Sea/Aleutian Islands (BSAI) that is overseen by the North Pacific Fishery Management Council. Historically, Tanner crabs were overfished and the fishery was closed from 1997-2004 and again from 2010-2012. In 2012, the fishery was officially rebuilt – although it remained closed for another year. Management has since been considered strong and fishery managers have responded to the challenges of managing Tanner crabs – whose populations fluctuate naturally – well.

Tanner crabs are managed as three separate stocks – east Bering Sea, eastern Aleutian Islands, and western Aleutian Islands. Fishery managers establish an overfishing limit for the entire population while defining a total allowable catch (TAC) limit for each individual stock. Under the FMP, the NMFS is responsible for permit requirements, observer requirements (if a vessel is selected), and the identification of Habitat and Areas of Particular Concern – which are subject to additional restrictions to prevent their degradation by fishing activities. The ADFG is responsible for the majority of in-season management decisions and actions, such as establishing TAC limits, seasons, and size limits (the latter of which can vary depending on the three stocks). Catch limits are based on a mature male harvest rate of 40 percent and only male Tanner crabs can be retained in the Tanner crab fishery. Additionally, the state of Alaska sets minimum thresholds for mature female biomass and if those thresholds are not met, the fishery will not open. Stock assessments are conducted annually and when setting the allowable biological catch for each season, managers apply any excess catch from the prior season to their total catch estimates which effectively lowers the allowable catch for the current season. In an effort to further reduce fishing pressure, a vessel buyback program was implemented in 2004 that removed 25 vessels from the fishery. Other management measures included in the FMP are: gear restrictions, pot limits, vessel monitoring systems, mandatory electronic logbook use, and a community quota system that allocates 10 percent of the annual TAC to regional coastal communities.

Current stock abundance is considered to be high and according to recent stock assessments, Tanner crabs are not overfished nor subject to overfishing.

The Federal Agency for Fishery (Rosrybolovstvo) is the federal agency responsible for fisheries and conservation of marine biological resources in Russia. Historically, Tanner crabs have been overfished in Russia.  While a total allowable catch limit is established for Tanner crabs, there are significant issues of illegal, unreported, and unregulated (IUU) fishing occurring in the fishery and as such, total landings often exceed the established TAC limit.

Tanner crab are found in the North Pacific and have medium inherent vulnerability to fishing pressure. They are primarily fished in Alaska, in the eastern Bering Sea. Tanner crab were previously overfished but a 2011 stock assessment showed that the fishery had recovered. However, the fishery remained closed until the 2013-2014 fishing year. Seafood Watch reported in late 2015 that the stock was in good standing.

The gear commonly used to catch Tanner crab tends to consist of large steel mesh traps or pots that soak on the seafloor for one to three days. Gear effects from pots tend to be minimal in the Tanner crab fisheries since they are usually set in soft, muddy habitats, according to Seafood Watch. Such sand and silt environments are less likely to be affected than harder habitats.

A Seafood Watch report from 2015 found that bycatch in the Tanner crab fishery is limited to female and undersized male snow and Tanner crabs. Other bycatch, including groundfish, was very low and did not include any threatened, endangered or overfished species.

Tanner crab are managed under a federal fisheries management plan overseen by the North Pacific Fisheries Management Council that is jointly managed by the National Marine Fisheries Service and the Alaska Department of Fish and Game. Measures include robust scientific monitoring, annual stock assessments, vessel monitoring systems, and strong stakeholder inclusion. Seafood Watch noted that the management has been able to successfully rebuild the fishery from its overfished status and called it highly effective.