Most spot shrimp are frozen aboard the boat and sold frozen raw, whole, and raw shell-on tails.  These shrimp have a sweet flavor, particularly the largest ones. These are expensive so some buyers recommend looking for deals in the fall, right after the Alaskan season ends. Spot shrimp, especially head-on, are treated with a sulfite-based antioxidant to preserve its bright red color. They do have an extremely short shelf life so buyers generally recommend buying frozen instead. Buyer beware: Make sure the count per pound is accurate rather than relying on terminology such as “jumbo” because grading varies. 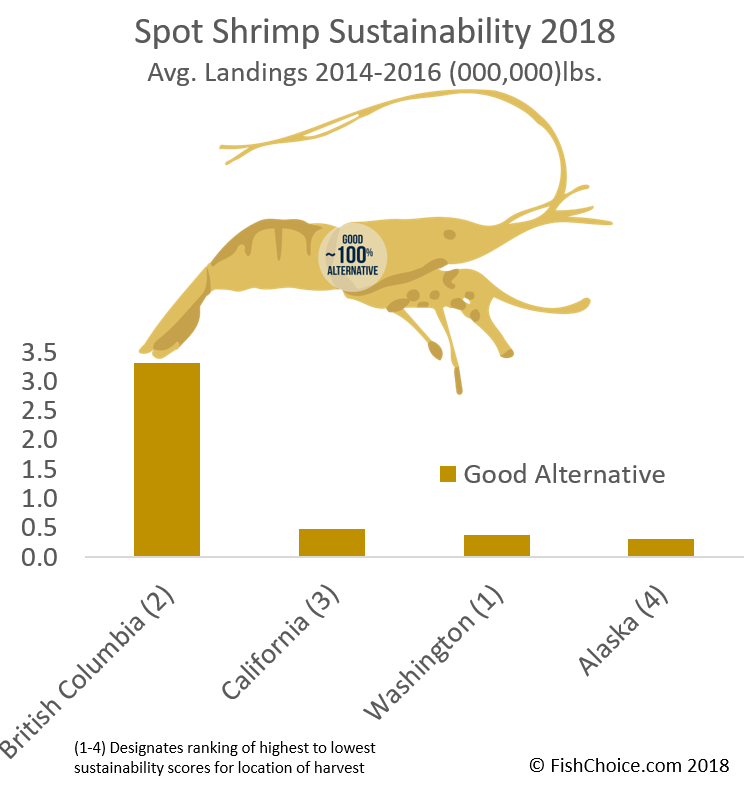 Key sustainability sourcing notes based on average landings of spot shrimp from 2014-2016 and using the most recent 2018 (Canada and U.S.) Seafood Watch assessments are:

Spot shrimp are most recognizable for the defining white spots on their tail, and white horizontal bars on the carapace, on an otherwise red-brown colored body. They are the largest of the shrimp species harvested in the US and Canadian Pacific. Spot shrimp live up to six years old, growing up to 9.8 inches (25 cm) and grow by molting their shells. They can live to between five and ten years old; however, growth information is limited and varies by location.

Spawning occurs in the late summer and early fall, and eggs hatch during the late spring. The larvae undergo five developmental stages in two to three months before settling on the ocean floor as juveniles. They migrate into deeper water as they get older. Spot shrimp go through five life stages from larvae, to male juvenile, to male adult, to female juvenile, to female adult. Males reach maturity at two years, and will mate at least once. The transition phase lasts about six months, turning fully female by their third year. Females mate at least once, producing between 1400 and 1500 eggs. Before fertilization, females molt, developing a shell structured to be able to brood the eggs on her abdomen. They carry the eggs for five months under their tails until hatched. If female spot shrimp reproduce a second time, they produce fewer eggs, usually only 1000.

Spot shrimp are opportunistic feeders, preying on other shrimp, plankton, small mollusks, worms, sponges, and organic detritus. They are bottom feeders, migrating nightly to shallower waters to forage, and returning to deeper waters during the day to hide from predators. They are prey to other bottom dwelling fish and octopus.

Spot shrimp are found along the Pacific coast of North America from Alaska to Baja California, Mexico. Their geographic range also extends across the Pacific Ocean and into the Sea of Japan and the Korea Strait. They can inhabit a wide range of depths from shallow, near shore waters to depths of up to 1,640 feet (500 meters) deep.  As they grow older, adults will move into deeper waters and will generally spend most of their adult life in depths between 640 to 770 feet (195-235 meters) deep. Spot shrimp forage on the seafloor throughout the day and night and prefer areas with some type of cover. They tend to inhabit rocky and hard bottoms including glass-sponge reefs, coral beds, and the edges of marine canyons. Off the Washington coast, large aggregations are known to occur along the edges of three marine canyons: Grays Canyon, Juan De Fuca, and NitNat Canyon. Distribution along the Pacific coast of North America is not uniform and is thought to be dependent on habitat selection and larval transport.

The Asia Pacific Environmental Exchange (APEX) developed the Spot Prawn Project in 2001 to shift the spot shrimp fishery toward long-term ecological, economic, and sociocultural sustainability. They found that spot shrimp reproductive and recruitment success is affected by:

Capture of juvenile rockfish in spot shrimp traps has been reported, raising concern due to declines in abundance of many rockfish stocks. A 2009 study published in Science Direct Fisheries Research documented the bycatch observed over a 10-year period, from 1999 to 2008, in a fishery-independent research survey using traps similar to those used in the commercial fishing industry. The overall rate of rockfish catch was low, but has been increasing since 2004. Catch rates of other species remained consistent throughout the period of the study. The study confirms that spot shrimp traps produce a low amount of bycatch by weight; however, it suggests that rockfish mortality as a result of shrimp trapping should be considered in commercial shrimp fisheries. The information would determine how this source of mortality may affect rockfish stocks, and promote research into bycatch reduction technologies to improve trap selectivity. An updated study in 2014 by the Natural Resources Consultants recommends research priorities be placed on reducing rockfish impacts from active and derelict shrimp pots, and reducing shrimp pot loss in the Puget Sound.

The California Department of Fish and Wildlife (DFW) manages the spot shrimp fishery through a three-tiered permitting system that limits the number of vessels, traps per vessel, and landings per vessel allowed in the fishery. California accounts for the majority of spot shrimp landings along the US West Coast (California, Oregon, and Washington) with the majority of this catch being caught using traps made by those fishers in Tier 1. Commercial fishers in Tier 1 and Tier 3 currently do not have fishing quotas while those in Tier 2 do. The number of traps a fisher can set at one time depends on the individual commercial permit; however, no more than 300 traps can be set in state waters (inside of three miles) regardless of permit tiers. Among additional measures the California DFW establishes are requirements that logbooks be completed after each day of fishing (to provide data on catch and effort) as well as seasonal closures from May to July to protect humpback whales and from November to January (south of Point Arguello) to protect spawning spot shrimp. The state of California currently does not require fishery observers for the spot shrimp fishery and there are no population estimates for spot shrimp in California.

In Washington, the Department of Fish and Wildlife manages the spot shrimp fishery. The fishery is restricted access (as of 1999) with a limit on the number of available commercial licenses. The Washington commercial fishery occurs in the Puget Sound and on the coast – with the two regions being managed separately.

Despite being managed separately, the regions share common management practices such as limited entry, area specific quotas, trip limits, gear restrictions (trap sizes, bans on trawl gears), and a closed season to protect spawning shrimp. In the Puget Sound, fishing quotas are determined by using logbook information and test fishery data. Monitoring is conducted through commercial logbooks, occasional at-sea sampling, pre and post season test surveys, and recreational catch data. Currently, the fishing quota is fully utilized by the state and Tribal fisheries in the Puget Sound. The total allowable catch (TAC) for the coastal fishery is divided equally between a “north” and “south” region. The coastal fishery is monitored through commercial logbooks and dockside sampling. There is little Tribal or recreational catch for the coastal fishery and the fishery has been below the established TAC.

The Alaska Department of Fish and Game (ADFG) and the Alaska Board of Fisheries manage the spot shrimp fishery in Alaska. The Alaska spot shrimp trap fishery operates within Guideline Harvest Ranges (GHRs) that are approved, among other regulations, by the Alaska Board of Fisheries and act similar to fishing quotas. Within the GHRs the ADFG sets annual Guideline Harvest Levels (GHLs) which function as fishing mortality targets. If the GHL is exceeded in one of the 21 management areas, that area is closed to fishing. Current data assessments are generally insufficient in estimating appropriate harvest rates for sustainable yield as well as at estimating shrimp population size. As such, the ADFG sets conservative GHLs and in past years, has proactively reduced annual GHLs to account for these uncertainties. The ADFG is also responsible for providing the Board of Fisheries with scientific advice and recommendations prior to each regulation the Board votes on as well as for designing and carrying out implementation plans. Among other measures to manage the spot shrimp fishery include: fishing seasons, size and gear restrictions, and commercial permit limits.

The Department of Fisheries and Oceans (DFO) Canada manages the spot shrimp fishery in British Columbia. Spot shrimp account for more than 90 percent of the landings caught in the multispecies shrimp trap fishery. The fishery is divided and managed on a Pacific Fishery Management Areas (PFMAs) sub-area level. Using catch per unit effort data, managers use a fixed escapement model, the Spawner Index Model, to assess the minimum number of spawning females required for the stock to remain healthy. Based on this estimate, managers set harvest limits for each particular PFMA sub-area. If the limit is reached in a particular PFMA sub-area that area is immediately closed to fishing. Additionally, if the number of spawning females falls to 10 percent above the Spawner Index, then that PFMA sub-area is closed. Among other measures the DFO uses to manage the spot shrimp fishery include: available commercial license limits, restrictions on the number of traps that can be used per license, gear and vessel restrictions, and single haul per day limits. The fishery is considered well managed and landings have generally increased over time.

Spot shrimp, also known as spot prawns, are slow growing and tend to aggregate in groups, making them somewhat vulnerable to repeated depletion from fishing. However, these characteristics are balanced slightly by their hermaphroditic nature and the females’ ability to produce thousands of eggs.

Spot shrimp is the largest coldwater shrimp fishery on the U.S. West Coast and in recent years fishermen there have had near-record catches. The shrimp abundance in the North Atlantic varies but is considered to be at a medium level overall. There is little data currently available to establish the spot shrimp population in Oregon, Washington, and California, according to the Monterey Bay Aquarium.

Spot prawns are primarily caught with pot traps in hard-bottom habitats where fragile corals and glass sponges live. Traps can do damage to those areas that requires decades of recovery. However, that effect is reduced when fishermen use shorter lines.

The traps used to catch spot shrimp are considered to be among the most sustainable gear because it results in some of the least bycatch. In this fishery, bycatch is low and primarily includes octopus, northern pink shrimp, and coonstripe shrimp. Gear in Alaska requires biodegradable escape devices.

Management measures covering spot shrimp, particularly in Alaska, are substantial and include scientific monitoring, seasonal closures when females are bearing eggs, gear restrictions, and limited entry. Outside of Alaska, more scientific evaluation of spot prawns is needed to establish the population status.