Jonah crab are fished year-round, but landings tend to be slightly heavier in the fall. Flaky white Jonah crabmeat has a sweet taste and is available fresh year-round. Cooked Jonah crab comes in packs of leg, body, or combination meat and the whole claws sold separately. Jonah “snap-‘n-eats” are pre-cooked, pre-cracked crab claws. This crabmeat tends to be consistent because there are only a few processors for this fishery. The relatively large claws can be an affordable substitute for stone crab claws, with cooked Jonah ones selling for about half the price. Jonah crabmeat can be substituted or blended with more expensive crabmeat to make value-added seafood products such as crab cakes and stuffed flounder. Check the leg-to-body meat ratio periodically since that impacts the price of Jonah crab. Male Jonah crab from Canada tend to be about an inch larger (5") compared to those landed in the U.S. (4"). 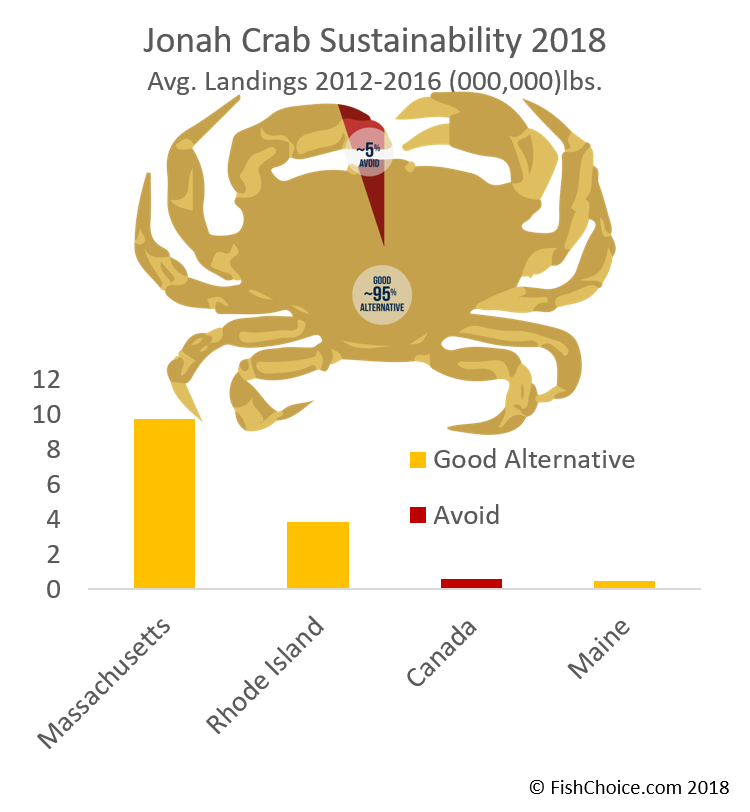 Key sustainability sourcing notes for Jonah crab based on landings data from 2012-2016 and the most recent 2015 (Canada) and 2016 (U.S.) Seafood Watch assessments is as follows:

Jonah crabs have a round shell with small light spots, and claws with dark brown-black tips. The largest male reported had a carapace width of 22 cm; while females rarely exceed 15 cm. Jonah crabs reach maturity at larger sizes in more northern habitats, with males at 13 cm carapace width, and females at 9 cm. The species are known to move to areas of preferred temperature, in order to better regulate their body temperature. Their neural circuits compensate for temperature variations, as each phase that produces certain behaviors (such as walking or chewing) is temperature-independent. Females move offshore in the fall and winter and inshore in late spring and summer. Jonah crabs eat mainly blue mussels, as well as arthropods, snails, algae, and other mussels.

Jonah crabs are found along the Atlantic coast of North America from Nova Scotia, Canada to the Dry Tortugas, Florida. They are generally found at depths of 164 to 984 feet (50 to 300 meters) and can even be found up to 2,625 feet (800 meters) deep. The life cycle of Jonah crab is poorly understood and little studied; however, what research there is has determined that their preferred habitat ranges from rocky substrates, with cover and crevices, in coastal and offshore areas to softer, silt and clay bottoms along the continental slope. While little is known about their movements and migration patterns, it is widely believed Jonah crab migrate in the spring to shallower waters and will return offshore to deeper, colder waters during the fall and winter. Most research has indicated the ideal temperature for Jonah crabs is between 46 and 54 degrees Fahrenheit (8 and 12 degrees Celsius).

There is little scientific research or monitoring of bycatch in the Jonah crab fishery. A 2014 study done at the Department of Biology and Marine Science Center at Northeastern University looked at the thermoregulatory behavior of Jonah crab. They found that the crabs will self-regulate their body temperature and will adjust the direction and magnitude of their movements towards their preferred temperature range. The range is impacted by a previous acclimation to a certain temperature; however, the study found that, in all cases, the crabs prefer temperatures warmer than those they had been living in previously. Because of their sensitivity to temperature, Jonah crabs are often studied as a model species for warming ocean temperatures.

The US Jonah crab fishery is managed by the Atlantic States Marine Fisheries Commission (ASMFC) under the Interstate Fishery Management Plan (IFMP) for Jonah crab. Approved in 2015, and implemented in 2016, the IFMP was prompted by the American Lobster Board due to concerns regarding the recent and rapid increase of Jonah crab landings in the American lobster fishery. Historically, Jonah crabs have been considered a nuisance bycatch in the lobster fishery and used to supplement operational cost for these fishers. In recent years a directed fishery has emerged for both Jonah and rock crabs as abundance and market demand have increased. The majority of Jonah crabs are harvested by lobster fishers using lobster traps and occur in Massachusetts and Rhode Island.

The IFMP establishes a singular management unit for Jonah crab from Maine through Virginia – encompassing the entire Northwest Atlantic and adjacent inshore waters. The plan creates a uniform program for fishers and aims to promote conservation, reduce the possibility of recruitment failure, and allow full utilization of the resource. Among measures the IFMP establishes are:

The US Jonah crab fishery is not a federally regulated fishery and there have been no federal stock assessments conducted for the species. As no coast-wide stock assessment has been undertaken yet, there is no definition of overfishing for Jonah crab. While little information is available regarding the stock status of Jonah crab and the impact of the fishery, the ASMFC intends to develop a research strategy to gather this information and it is considered a high priority for the future.

The American Lobster Management Board is also responsible for reviewing state compliance with the IFMP.

The Department of Fisheries and Oceans (DFO) Canada manages the Canadian Jonah crab fishery. Jonah crabs have traditionally been caught as bycatch in the Canadian inshore and offshore lobster fisheries; however, in the 1990s exploratory fisheries emerged as market demand for Jonah crab grew in Canada. In 2000 a permanent fishery was established and in 2004 all exploratory crab permits became permanent commercial licenses. As of 2010, there has been little to no commercial activity in the Maritimes (Nova Scotia, New Brunswick, and Prince Edward Island) due to a decline in abundance and therefore low catch rates as well as low market demand and price. The offshore Jonah crab fishery is inactive and most landings in that region are from the bycatch and bait fisheries for lobster.

These crabs are usually found in the western North Atlantic, with the primary source in the United States and have medium abundance since there is very little biological data available on them. Segregation by sex and size could make the crab vulnerable to fishing pressure, while the fecundity is on the higher side. The crab is susceptible to environmental variables, so its population varies.

Most Jonah crabs are caught with pots and traps intended to catch lobster, which have relatively little impact on the marine habitat. The areas where the crab is caught vary, with some being more sensitive and others more resilient to interactions with pots.

Jonah crab were once an annoying bycatch in the lobster fishery because they stole the bait, but now the crab have become a valuable commercial catch on their own. Critically endangered North Atlantic right whales sometimes get entangled in the lines connecting traps or pots together, making that a continuing environmental concern for the Jonah crab fishery.

Individual states manage the fishery in the U.S. while the Canadian government manages them in that country. Measures in both regions include minimum size limits; sex restrictions so that no females can be caught, seasonal closures, limited entry access, and bycatch provisions. However, since the Jonah crab fishery only emerged relatively recently, little scientific assessment has been done on it and there are currently no quotas.