Patagonian toothfish, aka Chilean seabass, is a big fish that can weigh 100 pounds headed-and-gutted although the average is closer to 20 pounds. The fish tends to be processed and frozen at sea. It’s then sometimes sold “refreshed” headed-and-gutted, as loins and skinless fillets. Most commonly it’s sold frozen in skinless fillets or headed-and-gutted. The meat is tender, moist and moderately oily with large, thick flakes. When raw the meat will be snow white and when cooked it will stay white. Look for refreshed fillets that are shiny and avoid frozen seabass that has discoloration or freezer burn. Alaskan sablefish can be an affordable, widely available substitute for Chilean seabass. 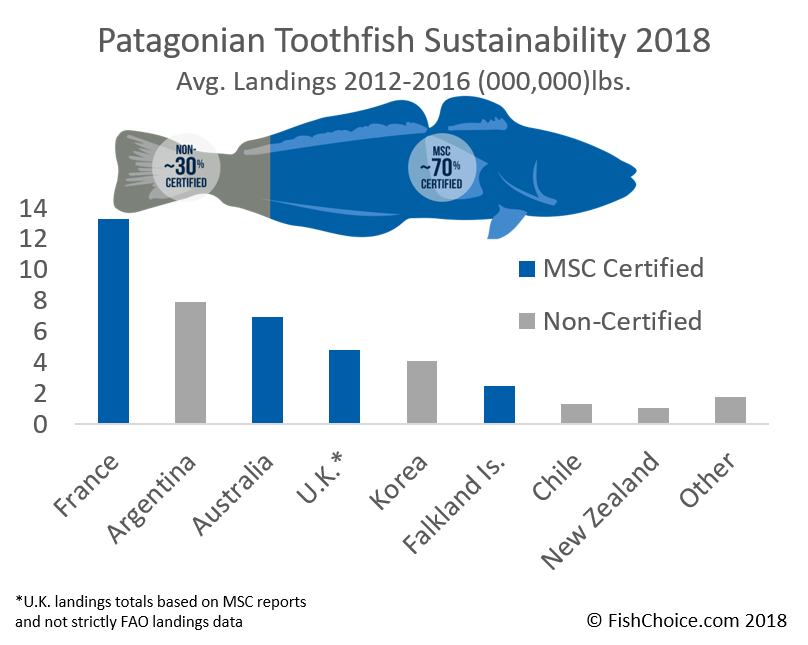 Patagonian toothfish are large, slender fish with a wide head and large eyes. The body ranges in color from brown to gray and is covered with large, smooth scales. They have a protruding lower jaw and sharp teeth along their upper jaw. Their pectoral fins are large and fan-like. Patagonian toothfish have two dorsal fins, the first of which is spiny. The species can reach up to 7.5 feet in length and weigh over 220 pounds. Patagonian toothfish can live upwards of 50 years.

This species has low fecundity and a relatively slow growth rate. Individuals start reproducing at around 8-10 years of age. Patagonian toothfish reproduce using the broadcast method of spawning. Spawning occurs during the winter when females release their eggs and males will release their sperm into the water column. Females can produce between 48,000 to 500,000 eggs per spawning season.

Patagonian toothfish inhabit sub-Arctic waters near the Antarctic Convergence in the Pacific, Atlantic, and Indian Oceans. They are found in offshore waters off Chile to Cape Horn, and off the coast of Argentina – specifically South Georgia, the Falkland Islands, Shag Rocks and the islands of the Scotia Arc. They are also found near Bouvet Island in the South Atlantic. In the Indian Ocean, they are found near Kerguelen Island, the Crozet Islands, Prince Edward Island, and the Heard and McDonald Islands. They are found near Macquarie Island in the South West Pacific. Patagonian toothfish occupy a range of bathymetric zones throughout their life – with juveniles being more pelagic and occupying depths no greater than 984 feet (300 meters) deep. As they mature, Patagonian toothfish will inhabit much deeper waters up to 8802-9843 feet (2500-3000 meters) deep. Adults will spawn at depths of around 3281 feet (1000 meters) and are rather demersal, solitary, and sedentary. They often occur near continental shelves, seamounts, and submarine banks.

Patagonian toothfish, marketed as Chilean Seabass, is a large, slow-growing deep-sea species found around the Southern Hemisphere, primarily off the coasts of Chile, Argentina and around sub-Antarctic islands. The species has been vulnerable to over-exploitation and its high commercial value has made it a constant target of illegal, unregulated and unreported fishing. A 2013 Monterey Bay Aquarium report indicated that Patagonian toothfish stocks around South Georgia, Heard and McDonald Islands, Macquarie Island and the Falkland Islands are abundant. Stocks in the Ross Sea appear to be doing well but there was uncertainty about the measurements. The Prince Edward and Marion Islands stocks were depleted, Crozet stocks were unassessed and highly vulnerable, while the Chilean fishery was assessed as being overfished.

Although the switch from bottom trawl to longline gear has changed the impact on the seafloor, demersal longline fishing in the Patagonian toothfish fishery has accidentally killed numerous seabirds. Threatened or endangered species captured include black-browed albatross, grey-headed albatross, rockhopper penguin, white-chinned petrel, yellownose skate and the porbeagle shark, according to the Monterey Bay Aquarium. Management measures have had success in reducing seabird bycatch to low levels although illegal fishing vessels lack even basic bycatch mitigation.

Management policies vary depending on the Patagonian toothfish fishery but the primary management body for Patagonian toothfish is the Commission for the Conservation of Antarctic Marine Living Resources or CCAMLR, established in 1982. The Commission has substantial management measures in place that include catch limits, fishery closures, gear restrictions, population assessments, and 100% scientific observer coverage. The Commission has also had success in reducing illegal, unregulated and unreported fishing since dedicated efforts began in 2000, but the practices persist on the Banzare bank in the Western Indian Ocean.