The main source of red snapper is the Gulf of Mexico (both U.S. and Mexico). Red snapper from the U.S. is almost always sold with the skin-on. When buying whole red snapper, look for deep red fins, pinkish-silver bellies, and red gills that look healthy. When buying fillets, choose skin-on as skin-off fillets might not be genuine red snapper. The white flesh of a red snapper should be moist and reflective, free of gaping and drying. When used for sushi, red snapper is known as tai although several other species are also marketed as tai. Beware of mislabeling: red snapper sold on the U.S. West Coast ("Pacific red snapper") may actually be rockfish, which has a very different texture and flavor. 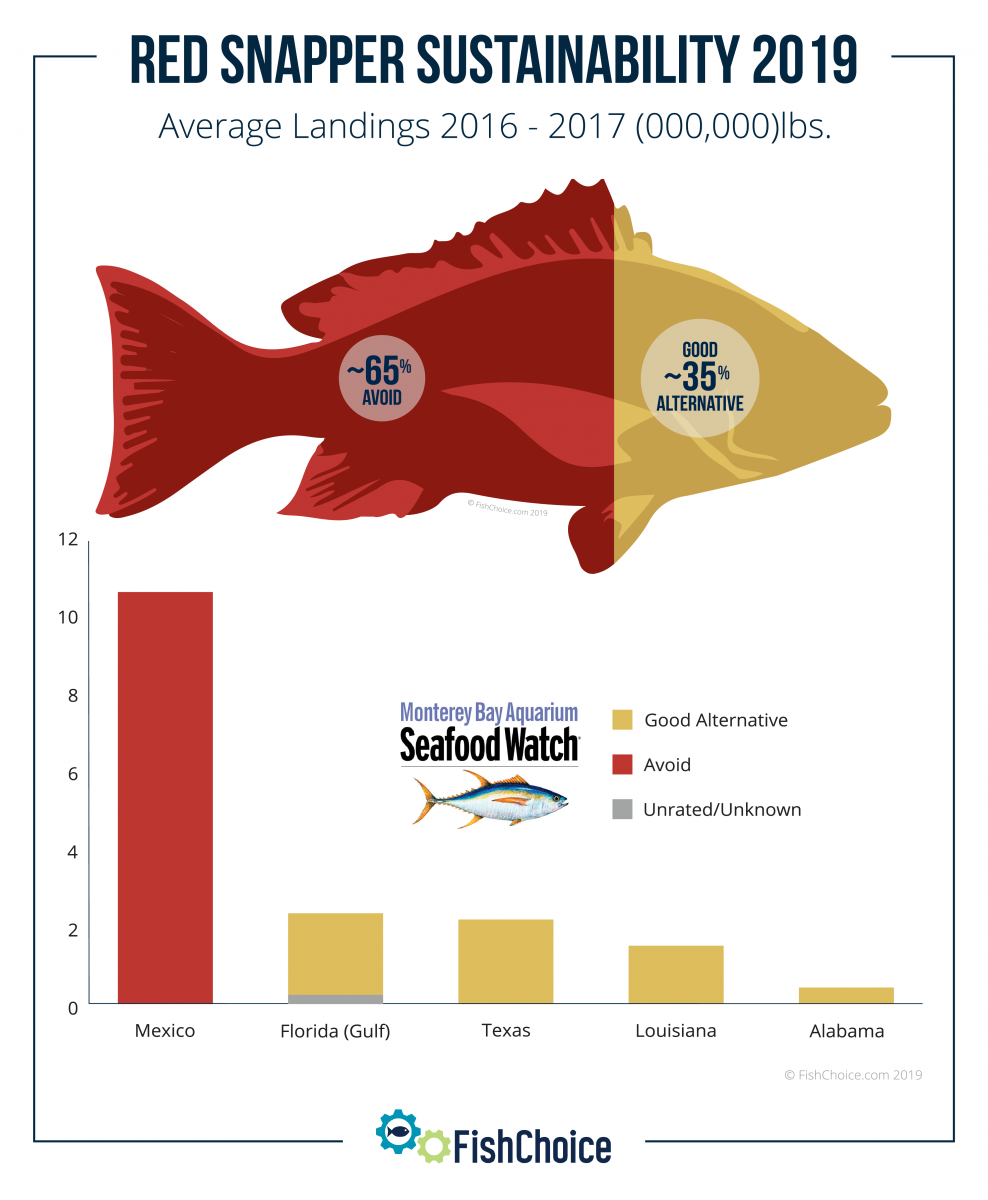 Key sustainability sourcing notes based on average landings of red snapper from 2016-2017 and using the most recent Seafood Watch assessments as of June, 2019:

Red snapper grow up to 40 inches in length and 50 pounds. Females are able to reproduce as early as two years old, with spawning season lasting from May to October. Red snapper live a long life – up to 57 years old reported in the Gulf of Mexico, and 51 years old reported in the South Atlantic. Populations found in deeper waters tend to be redder than those in shallower waters.

Red snapper are nocturnal predators, feeding on fish, crab, worms, shrimp, octopus or squid, and some plankton. Their enlarged canine teeth are a definitive characteristic, which led to the name “snapper.” They are prey to marine mammals, turtles, and larger carnivorous fish such as: jacks, grouper, sharks, barracudas, and morays.

Red snapper are found throughout the Gulf of Mexico and along the US Atlantic with the Atlantic range extending from Florida to Massachusetts  – though the species is considered rare north of the Carolinas. Larval red snapper inhabit the water column while juveniles live in shallow waters usually over sandy or muddy bottoms. Adults live on the ocean bottom at depths from 30 to 620 feet deep on the continental shelf. Adult red snapper are generally found near hard structures with moderate to high relief such as coral and artificial reefs, ledges, and caves. They can also be found near soft-bottom areas and limestone deposits.

Red snapper, found in the Atlantic from North Carolina to northern South America, the Caribbean and Gulf of Mexico, are slow growing, long lived and have moderate vulnerability to fishing pressure. Red snapper in the United States was heavily fished for decades, leading to it being overfished. The population has been rebuilding to the point where it is no longer experiencing overfishing in the Gulf of Mexico. However, red snapper in the South Atlantic is still well below the target level.

Fishermen primarily use hook and line gear in the form of handlines and electric reels to catch red snapper. This type of gear has a low impact on the ocean habitat. A very small percentage is also caught using longlines, which have a moderate impact on the habitat.

Sea turtles and sawfish are vulnerable to hook and line gear. In the Gulf of Mexico, fishermen using hook and line gear must use circle hooks and dehooking devices to help any non-targeted fish survive, according to the U.S. National Marine Fisheries Service. Snapper fishermen have inadvertently caught speckled hind, Warsaw grouper, gag grouper, loggerhead sea turtles, green sea turtles, leatherback sea turtles, snowy grouper, Atlantic bluefin tuna, and blacknose shark. But most of the non-targeted fish caught in the fishery are not species of concern, the Monterey Bay Aquarium reported. Juvenile red snapper is also accidentally caught by shrimp fishermen, who are attempting to reduce this bycatch through improved management measures, including the use of bycatch reduction devices.

NOAA Fisheries' South Atlantic and Gulf of Mexico Fishery Management Councils manage red snapper. They are considered moderately effective by the Monterey Bay Aquarium. In 2010, red snapper harvesting in the South Atlantic was prohibited to help the population recover from overfishing. The fishery was reopened on a limited basis in September 2012. A rebuilding plan for the Gulf of Mexico was put into place in 2001. The Environmental Defense Fund credits an innovative catch share management plan implemented in 2007 with increasing the red snapper population in that area. Management measures for that red snapper fishery include catch limits, gear restrictions, minimum size limits, an individual fishing quota program and area closures.