Walleye pollock is usually available in single or twice-frozen fillets either deep-skinned or with the fat layer intact; fresh pollock exists but isn’t common. Deep-skinning the fish results in whiter fillets, but the lower meat yield tends to mean paying a higher price for the fillets. This fish has a delicate, sweet flavor; compared to Atlantic pollock they are smaller, have whiter flesh, and less oil. Whole fish average 3lbs. pounds in size, and fish from the Gulf of Alaska tend to be the largest. About 40% of the walleye pollock in the U.S. market is from Russian fisheries, and mostly imported after being processed in China. The supply of walleye pollock is large, stable, and available year-round. According to some buyers, the highest quality walleye pollock is from factories that freeze the fish at sea right after it’s caught.

Marketing note: As of January 21, 2016, only pollock caught in Alaskan waters can carry the name "Alaskan pollock." 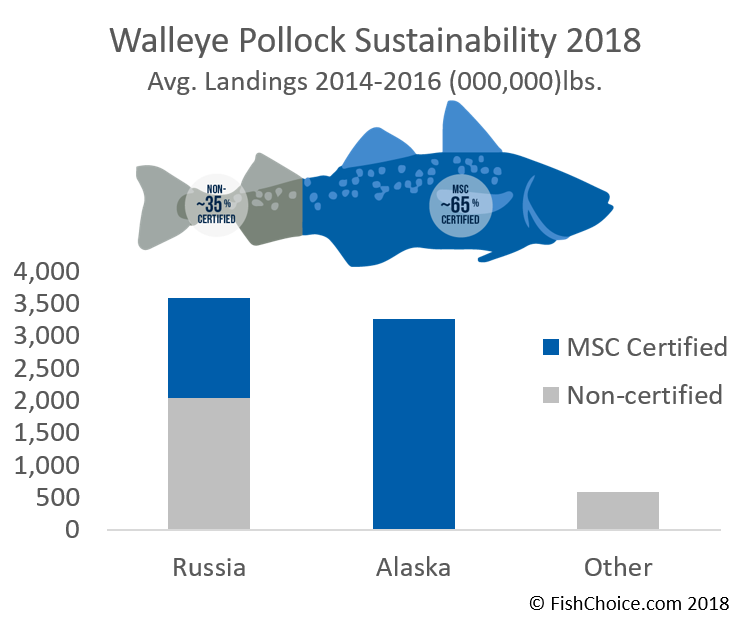 Based on average global landings of walleye pollock from 2014-2016 and using MSC certifications (2016: Alaska- Bering Sea and Aleutian Islands and Gulf of Alaska, and 2018: Russia- Sea of Okhotsk), the sustainability breakdown of walleye pollock is as follows:

Pollock are a member of the cod family but are distinguishable by their speckled coloring, which helps them blend in with the seafloors. Walleye pollock grow quickly, up to three feet long (about one meter). Most, however, are between 12 and 20 inches in length (30 and 50 cm) and weigh between one and three pounds. They live up to about 12 years old, and are therefore more productive compared to longer-lived, slow growing species.

Pollock migrate to shallower waters in the spring to feed and breed, and move to warmer, deeper waters in winter. They are extremely fertile, reaching maturity between the ages of three and four. As a result, harvested fish are replaced in just a few years. The survival rate of young pollock is highly variable, and depends on several factors, including: food availability, environmental conditions, and predation. Pollock have well-developed drumming muscles that they use to produce sounds to initiate spawning.

Pollock exhibit diel vertical migration, meaning they follow the daily and seasonal movements of their food. Juvenile pollock eat zooplankton and small fish. Adult pollock feed on fish, including juvenile pollock. Many species eat pollock and rely on them as a main food source, including: sea lions, marine mammals, fish, and seabirds.

Walleye pollock are found throughout the northern Pacific Ocean and range from California to Alaska along the US West Coast. In Alaska, they are found in Gulf of Alaska and more commonly, in the Bering Sea. Across the Pacific, pollock occur in Japan, China, and Russia’s Sea of Okhotsk. Pollock live anywhere from shallow, near shore waters to depths of up to 3,281 feet (1000 meters); however, they are most common between depths of 328 to 984 feet (100 to 300 meters). Younger pollock live in the midwater regions of the ocean with older fish inhabiting areas near the ocean floor. Pollock tend to swim in large schools and move inshore during the summer months – moving offshore into deeper waters during the winter months.

The abundance of walleye pollock is estimated through both annual bottom trawl surveys done by the Alaska Fisheries Science Centre, and acoustic trawl surveys in the Gulf of Alaska every winter and every other summer. A 2014 study published by Oxford University Press on behalf of International Council for the Exploration of the Sea 2015 found that walleye pollock are more available to bottom trawl gear than to acoustic gear during the day. Variability to both gears depends on environmental factors, bottom depth, light conditions, and fish size. Availability to acoustic gear is also related to surface temperature.

The American Fisheries Society has announced that the scientific name for walleye pollock has changed from Theragra chalcogramma to Gadua chalcogrammus due to DNA sequencing closely relating walleye pollock to Atlantic cod. The common name for walleye pollock will remain Alaska pollock or walleye pollock. Eventually buyers and sellers will have to change their labels and shipping documents; however, it will take several years for regulating agencies to update their nomenclature. The relevancy in this change lies in the management of the fish population and its fisheries, and the data used therein. In addition to the FDA’s seafood list guidance page, NOAA Fisheries will post any new information regarding this change.

NOAA Fisheries and the North Pacific Fishery Management Council manage the US walleye pollock fishery under the Fishery Management Plan (FMP) for Groundfish of the Gulf of Alaska (implemented in 1978) and the FMP for Groundfish of the Bering Sea and Aleutian Islands Management Area (implemented in 1982). For management purposes five stocks of walleye pollock are recognized: Aleutian Islands, Eastern Bering Sea, Bogoslof, Western/Central/West Yakutat Gulf of Alaska, and the Southeast Gulf of Alaska. The majority of the total US catch occurs in the Bering Sea. The US walleye pollock fishery is one of the most valuable fisheries in the world – with 2014 commercial landings being valued at US $400 million and products derived from pollock being valued at US $1 billion for that same year. It is also considered one of best-managed fisheries in the world and was one of the first US fisheries to be managed under a catch share program. Among other measures the FMPs address are:

The FMPs also establishes a Community Development Quota (CDQ) program. The CDQ program was created to provide eligible western Alaskan villagers the opportunity to participate and invest in local fisheries. In the Bering Sea and Aleutian Islands approximately 10 percent of the TAC for walleye pollock is allocated to the CDQ program.

According to a 2015 stock assessment for walleye pollock the Aleutian Islands, Bogoslof, and Western/Central/West Yakutat Gulf of Alaska stocks are not overfished. A 2015 stock assessment for the Eastern Bering Sea also indicated that that particular stock is not overfished and that spawning biomass is above target levels. The overfished status for the Bogoslof and Southeast Gulf of Alaska stocks is unknown; however, none of the five stocks are currently subject to overfishing.

Walleye pollock, also known as Alaskan pollock, has a relatively fast growth rate, high reproductive potential, and speckled coloring that helps it hide from predators, but it aggregates to spawn. These factors, as well as environmental conditions and food availability, contribute to a variable survival rate for young pollock.

Walleye pollock is found off the US northwest coast from California to Alaska as well as the waters of Russia, China, and Japan. By volume, it is the largest fishery in the United States. Walleye pollock’s variable survival rate results in fluctuations in abundance. According to the U.S. National Marine Fisheries Service, the Bering Sea population of walleye pollock is estimated to be above 2010 target levels while the population in the Gulf of Alaska is below target levels. The Environmental Defense Fund reports that Russian stocks have been in decline recently due to overfishing.

This fishery primarily uses midwater trawling gear that isn’t supposed to impact the seafloor. However, the Monterey Bay Aquarium reports that the nets in the Bering Sea do contact the seafloor about 44% of the time, causing damage. Research shows that this trawl’s impact on seafloor organisms was relatively low because most of the species affected there are fairly resilient. There were concerns that the walleye pollock fishery was impacting the endangered Steller sea lion population by reducing an important food source. To address this, trawling is now prohibited in large areas near sea lion rookeries.

The walleye pollock fishery does not have bycatch of threatened, endangered, or protected species. Bycatch of prohibited species such as Chinook salmon, was a problem and reached a record high in 2007, but management measures have since been put in place to better protect the salmon.

This fishery is generally well managed, according to the Monterey Bay Aquarium. The Environmental Defense Fund says the U.S. fishery has one of the strongest catch share management systems in the world. Policies are in place to respond to stock fluctuations and managers take multiple factors into account to make sure the populations are fished sustainably, according to the National Marine Fisheries Service. Walleye pollock fisheries in the Gulf of Alaska, the Bering Sea, and the Aleutian Islands have been certified against the Marine Stewardship Council’s environmental standards. Russian fisheries in the Bering Sea and the Sea of Okhotsk are currently undergoing assessment against MSC standards.

Walleye pollock are also found in international waters where no country has sole jurisdiction. The Convention on the Conservation and Management of Pollock Resources in the Central Bering Sea is responsible for the conservation, management, and optimum utilization of pollock resources in the high seas area of the Bering Sea. The pollock resource in the Convention Area declined to very low levels by the early 1990s. Member states (China, Japan, Korea, Poland, Russia, and the United States) have maintained a moratorium on commercial pollock fishing in the Convention Area since 1993 in an effort to allow the stock to rebuild. Despite the moratorium, pollock abundance in international areas remains at low levels. The United States continues to promote and support these international conservation measures.