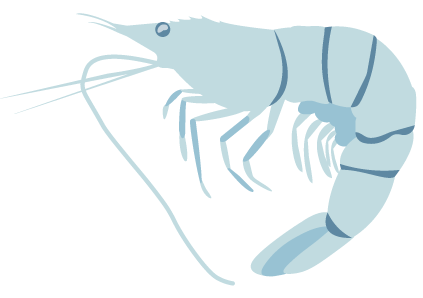 The quality of whiteleg shrimp raised in ponds is typically high because of strict controls and lack of at-sea time. Individual Quick Frozen (IQF) and block-frozen whole shrimp are popular forms of sale for whiteleg shrimp. When deciding between fresh or frozen, the best rule of thumb is to buy frozen unless purchasing the shrimp live or in tanks. The majority of fresh shrimp in display cases are previously defrosted since most of the shrimp were deep frozen and delivered in that state.

It is standard practice for peeled shrimp to be dipped in phosphates to minimize drip loss, which should be stated on the label. If thawed shrimp feels soapy, it has been soaked in phosphate for too long and has absorbed excess water. Avoid shrimp that smells like ammonia, which is a telltale sign of spoilage. Black spots on the head of head-on shrimp is the result of oxidation, which is a good indication that the shrimp is not at its freshest.

Whiteleg shrimp is a benthic warmwater species that can grow up to 9 in (23 cm) in length. Their body is translucent with a blue-green hue due to their pigmented chromatophores, which are pigmented and light-reflecting cells.

Whiteleg shrimp first mature around 6-7 months as males and eventually turn into females. Olfactory and tactile courtship rituals are common for mating behavior. Females can spawn between 100,000-250,000 eggs, and fertilization occurs via indirect sperm transfer. Hatching occurs about 12-16 hours after spawning and fertilization.

In the wild, whiteleg shrimp are found in subtropical to tropical waters in a range of depths between 0-236 ft (0-72 m) and in a preferred water temperature of 79° F (26° C). They are found in the Pacific Ocean, from Sonora, Mexico to southern Peru. Adults occur in bottom mud marine environments in the open ocean while juveniles favor estuarine environments.

In the US, the majority of farms are converted from terrestrial crop farms. Other recirculating aquaculture systems (RAS) operations also utilize previously existing buildings. Therefore, sensitive and high-value habitats have not been impacted by shrimp aquaculture. There has been no overall loss of habitat functionality. Shrimp farms are heavily regulated by state and federal agencies, and strong legislation and enforcement prohibits significant habitat impacts.

Historically, especially before the late 1990s, global shrimp farming has been linked to the destruction of ecologically important wetlands such as mangrove forests. For example, in Mexico, the Gulf of California is a high conservation environment because it hosts a large variety of unique habitats. Tropical mangrove forests are located in the lower 2/3 of the Gulf and intertidal habitats occur throughout. 95% of the Gulf’s mangrove-associated lagoons have been developed for shrimp farming. Most farms likely also drain directly into mangrove lagoons. Interactions with these habitats is the subject of global controversy. Some farms however, like those in Honduras, are sited on salt flats behind the mangrove fringe, which causes much less impact.

In Asia, mangrove forests have also been depleted for shrimp aquaculture farms. In Indonesia, the industry is the single largest historic cause of mangrove loss, although this trend is no longer common practice. For instance, in Thailand, shrimp farm siting is controlled and restricted to shrimp aquaculture zones. Mangrove deforestation for aquaculture ponds is illegal, and the government is actively working to reclaim land and restore mangroves in affected areas. However, due to a lack of capacity, enforcement is somewhat limited. Chinese farms have historically been sited in mangroves, mudflats, estuaries, and coastal intertidal areas, but the absence of available coastal areas have caused farmers to rapidly expand to inland agricultural areas since 2008.

Two-thirds of Vietnam’s mangrove forests were converted for aquaculture between 1980 to 2000, and disturbing acid soils during pond construction led to extreme acidification and further mangrove damage. This led to ponds being abandoned and new areas being cleared for more ponds. Vietnam has two predominant production systems for whiteleg shrimp, including integrated shrimp-mangrove pond systems and intensive ponds. The integrated mangrove systems are extensive farming practices with mangrove trees planted in the ponds themselves or on land within the farm boundary. These farms are legally required to maintain 60% mangrove coverage, but there is evidence this is not being enforced. In addition, only a single species is planted rather than multiple species.

Commercial shrimp aquaculture in the US uses 25% fishmeal and 6% fish oil, principally from Gulf menhaden. The Fish In: Fish Out (FIFO) ratio is relatively high compared to global shrimp culture. This is a significant net loss of protein (~64%) and requires a total footprint of 36.5 acres (14.74 hectares) of land and ocean area to produce the feed ingredients needed to grow one ton of shrimp.

In general, pond farming in Latin America yields a relatively high (~50%) protein loss, and about 16 acres (6.5 hectares) is required to produce the feed ingredients for one ton of farmed shrimp. Honduras utilizes a feed that yields a smaller feed footprint, with 7% fishmeal and 2% fish oil with a low use of wild fish. Tilapia processing byproducts comprises half of the fishmeal and half of the total protein is from nonedible sources.

In Indonesia, extensive farms rarely use commercial feeds – farmers rely on fertilizers to induce algal blooms as a food source. Intensive farms rely on commercial feeds. On the other hand, Thailand feed uses fishmeal and fish oil made from whole wild fish and byproduct sources. Although the fishmeal inclusion level is a moderate 12% and the fish oil inclusion level is very low at 0.27%, the Thai small mesh trawl fishery used to provide the wild portion of the fishmeal has a history of Illegal, Unreported, and Unregulated (IUU) fishing practices. In other countries like India, fishmeal levels are high (25%) with low fish oil levels (1.5%).

In the US, disease outbreaks are uncommon, which significantly reduces the need for chemical use. “High Health” or specific pathogen free (SPF) shrimp sources have helped control disease such as viruses. Best management practices currently mitigate the risk of disease outbreaks within farmed populations and disease transmission to wild populations.

Several types of shrimp disease are problematic in the global shrimp aquaculture industry. Even in RAS systems, disease can be an issue for production. However, there is a low risk of transmission to wild populations due to the limited amount of discharge.

Generally, limited data exists on the current use of chemicals and antibiotics in shrimp farms. Antibiotics are authorized based on country. In certain countries such as Nicaragua, bacterial and viral disease outbreaks have been an issue, causing serious economic challenges for the industry. Instances of severe disease transmission to wild populations has been documented in Mexico.

Overall, aside from Mexico, significant transfer of shrimp diseases to wild populations have not been reported. The spread of shrimp pathogens in Indonesia is persistent due to weak regulatory structures and lax enforcement despite the use of best practices. Intensive whiteleg shrimp culture in Indonesia utilizes widespread antibiotics that has led to resistant strains of bacteria that are highly or critically detrimental to human health. Some antibiotics still being used are banned in both Indonesia and the US. In Thailand, although water exchange is low, pathogen-related infection or mortality can still occur especially if farms do not adequately treat the water after an unplanned, disease-related harvest.

Ineffective regulations have resulted in the ongoing use of antibiotics and antimicrobials by Chinese farms both banned in China and the US. Malaysia’s regulatory monitoring data shows a perfect record of compliance since 2008, but there is some evidence that farms could potentially use World Health Organization (WHO)-listed highly and critically detrimental antimicrobials for human health. Shrimp disease transfer to wild populations in Malaysia have not been reported to have significant impacts. Illegal antibiotic use is also occurring in Vietnam, which could be mainly due to the issue that uninformed farmers can access antibiotics without a prescription.

Coastal outdoor ponds present the greatest risk of farmed shrimp escape. Raised pond dikes and multiple discharge screens are some examples of practices that can mitigate risk; however, escape is still possible. Escaped shrimp can interact with wild populations, but hybridization and deleterious genetic impacts is still considered highly unlikely. Escape of other intentionally introduced species aside from shrimp is null.

In countries like Indonesia, India, China, Malaysia, Vietnam, and Thailand, whiteleg shrimp are a non-native species. Despite introductions from escaped individuals, there is no evidence that they have established themselves in the wild, although they can still present competition for food and space. Escape risk in Thailand is moderately high due to low-lying sites and coastal flooding, but prevention measures such as elevated dike construction, screens, and pre-storm harvesting mitigate the risk.

In the US, data shows there is no evidence of adverse effluent impacts from shrimp farms. Best management practices combined with strong federal and state regulations and enforcement further reduce this risk. Any discharge must be equal to or better quality than receiving waters, with effluent requirements individually set for each farm site.

Recirculating aquaculture systems can use a variety of effluent treatments for discharge. Often, freshwater systems will collect solids for fertilizer or compost and will treat soluble waste before discharging. The farms that do capture solids, appropriately dispose of it, and appropriately treat the nutrient waste do not contribute to cumulative ecological impacts.

In contrast, marine systems often discharge directly into the environment and the level of treatment varies. Effluent from shrimp farms has the potential to negatively impact the surrounding local and regional environment due to nitrification, sedimentation, and changes in hydrology. In ponds, water exchange is limited as most water loss is due to evaporation rather than discharge, but water is still released during harvest. Some farms can use nitrogen fertilizer, but relatively low nitrogen discharges are possible if water exchange is also relatively low. On the other hand, in Mexico, the level of untreated nutrients discharged is significant due to the volume of discharge (equivalent to the untreated sewage of 1.7 to 1.9 million people per year). Nutrient input can contribute to Harmful Algal Blooms (HABs). However, on a larger scheme, effluent from Mexican shrimp farming is still relatively minor when compared to agriculture and other anthropological sources.

Effluent in Thailand is regulated by an area-based, cumulative management system with requirements to meet specific water quality standards. Although there is some uncertainty regarding the comprehensiveness of these standards, coastal and surface water quality in Thailand appears to have improved over the past five years. Chemical use in Thai shrimp ponds is common but pose a low risk to the environment due to the <1% water exchange rate. However, the use of antibiotics can lead to antibiotic-resistant bacteria in the environment and risk both environment and human health.

Juvenile shrimp from domestic hatcheries is sourced for stock in the US, therefore sourcing is completely independent of wild populations.

In most global RAS facilities, farmed populations are sourced from hatchery-reared broodstock rather than wild-caught individuals. Pond farms in some countries like Ecuador generally are hatchery-raised from native broodstock selected over several generations for improved performance and disease resistance. Artisanal and extensive farms in other countries such as Nicaragua still use wild-caught juveniles, but the use of captive bred broodstock is likely increasing.

Indonesian, Chinese, and Thailand farms are 100% reliant on hatchery-produced broodstock and seed stock. China and Malaysia source their broodstock directly from SPF-certified hatcheries in Hawaii, thereby reducing the overall risk of unintentional introductions.