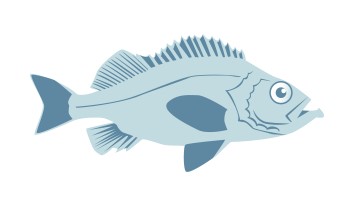 Acadian redfish, aka 'ocean perch' is the only fish in the rockfish / ocean perch family in the Atlantic, compared to the ~50+ sebastes spp. in the Pacific. The fish is called redfish in New England and Canada, but is not to be confused with redfish from the Gulf of Mexico (which is a drum). Acadian redfish are harvested year-round but are most prevalent during the spring and summer from the Gulf of Maine. Acadian redfish often weigh up to 5 lbs, but market size tends to be 1.5-3 lbs. at a length of 18-20 inches. Whole fish may have bulging eyes from being brought to the surface from depth, and it is not a sign of poor quality. Larger fish have a more coarse texture and deep-skinned ocean perch with the fat line removed has the most delicate flavor. The flesh is firm, white-fleshed (thought not as light as cod), and turns opaque white when cooked. The meat requires careful handling, because it tends to spoil more quickly than other fish. Redfish is growing in popularity because of its versatility, ability to be served whole, and it can be a substitute for haddock and other groundfish.

Acadian redfish grow slowly, up to 18-20 inches in length, and live to 50 years old or longer. They have a low reproductive rate and are late to mature, at five to six years old. Mating season for the Acadian redfish is from late autumn to early winter; however, eggs are not fertilized until the spring, where they are then incubated for 45-60 days.

Egg fertilization, incubation, and hatching occur within the female redfish’s body, which enables them to give birth to live young typically in July and August. 15000-20000 larvae are produced per spawning cycle, and have a relatively high survival rate compared to other egg-laying fish. The newborn redfish are able to swim and forage for plankton.

Juvenile redfish remain near the surface feeding on small crustaceans until they are two inches long, when they then move to the ocean bottom. Young redfish are black and green until they move deeper in the water column and turn red. Populations caught in deep water and brought to the surface are likely to exhibit barotrauma, which is injury caused by a change in air pressure, notable by an enlargement in the fish’s swim bladder and bulging eyes. Fish suffering from barotrauma can survive if released properly and quickly.

Acadian redfish are found in the US Atlantic Ocean from Long Island, New York northward to Labrador, Canada. The species’ range extends eastward to Iceland and Norway and to the southern waters of Greenland.  Acadian redfish are common in deep waters off the Gulf of Maine and tend to inhabit waters between 100 m and 400 m deep in this area. They spend most of their lives close to the seabed and show a preference for rocky, structurally complex habitats, but can also be found near muddy and clay ocean bottoms. The species moves off the ocean bottom at night to feed and will move closer to shore in the winter.

Acadian redfish, found in deep water near the ocean bottom of the Atlantic from Norway to Georges Bank, are most populous in the Gulf of Maine. They have some characteristics that make them moderately vulnerable to fishing pressure. In the 1980s, Acadian redfish were classified as overfished, but management measures over the course of 25 years led to the population being declared rebuilt in June 2012.

Acadian redfish are primarily harvested in the United States using otter trawls, which can cause damage to the seabed. These deep-water harvests could be having negative effects on sea corals. FishWatch noted in 2015 that research projects are under way to determine the impact. A Seafood Watch report from 2015 called habitat impacts for bottom trawl fisheries a high conservation concern, but said there is a lack of data on the areas where redfish live in the Gulf of Maine.

The type of bottom trawls used in the U.S. Acadian redfish fishery have been known to catch non-targeted fish species and occasionally ocean mammals. Bycatch studies on the meshes used to target Acadian redfish show that the primary unintentional catch tend to be juveniles, spiny dogfish, and pollock, a 2015 Seafood Watch report noted. Seafood Watch also called bycatch of vulnerable Atlantic halibut in the fishery a high concern.

In the United States, Acadian redfish are managed by NOAA Fisheries and the New England Fishery Management Council. Measures include permit requirements, time and area closures, catch limits, and minimum size limits. In 2010, the fishery went to a quota-based management system. A 2015 Seafood Watch report said this move may reduce incentives for illegal fishing and discards in the groundfish fishery, which includes Acadian redfish. Seafood Watch called overall management for this specific fishery moderately effective, namely due to ongoing concerns about managing habitat impacts.