Pink shrimp are marketed fresh or frozen, shelled or unshelled, raw or cooked. They are caught year-round but tend to be most abundant during the winter and spring. These shrimp are tender and mild with sweet-tasting flesh in their tails. Raw pink shrimp should smell like the ocean without any ammonia smell. Pink shrimp landed in northern Florida can be difficult to distinguish from brown and white penaeid shrimp when raw, as they all can look translucent pink to gray in color; Key West pinks are easy to distinguish as they have a bright pink color when raw. Cooked and shelled pink shrimp should be plump. 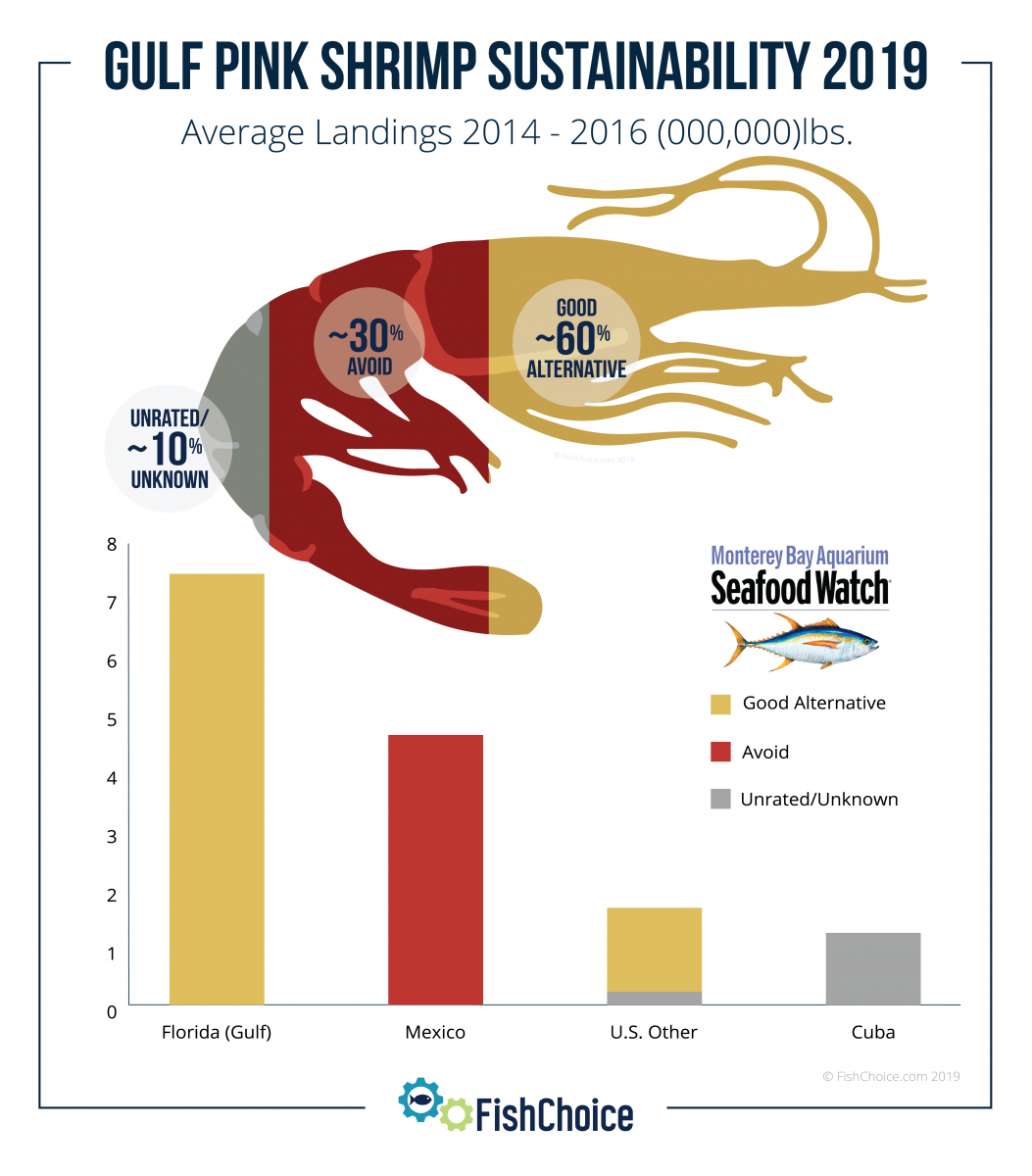 Gulf pink shrimp are crustaceans with five pairs of slender, long walking legs, and five pairs of swimming legs that are located on the front of the abdomen. Their carapace, which functions as a protective cover, has grooves and part of the shell is a well-developed, toothed rostrum that extends forward beyond their eyes. The eyes of pink shrimp are on top of flexible stalks which can help them detect predators. This species typically has a dark-colored spot on each side between their third and fourth abdominal segments. The tail usually has a dark blue band.

Pink shrimp have a fairly fast growth rate which can depend on factors including water temperature and salinity. They can grow up to 11 inches long. Although they grow quickly, the species has a short lifespan, normally living for only 2 years. Gulf pink shrimp start reproducing when they reach around 3.3 inches long and spawning periods can vary from one location to another – in North Carolina waters, spawning lasts from late spring to July and in Florida, pink shrimp will spawn multiple times, with a peak lasting from April to July.

Along the outer continental shelf, males will mate with females by anchoring their sperm to the females. Females release upwards of one million eggs near the ocean floor and the eggs are fertilized as they are released. Traveling along shoreward currents, newly hatched shrimp make their way to nursery habitats in estuaries during the late spring into early summer. Those that survive the winter will grow rapidly in estuaries and then migrate back to the ocean.

Larvae feed on plankton, while juvenile and adult shrimp are opportunistic feeders. They will eat a variety of things including copepods, small mollusks, diatoms, algae, and detritus. Sheepshead minnow and aquatic insects and their larvae feed on post-larval pink shrimp. Other crustaceans, such as grass shrimp and blue crabs prey on young shrimp. A variety of finfish also feed heavily on both juvenile and adult pink shrimp.

Gulf pink shrimp are found from the southern portion of the Chesapeake Bay, southwards to the Florida Keys and around the coast of the Gulf of Mexico, to Cape Catoche and the Isla Mujeres on the Yucatan Peninsula. They are most abundant off the southwestern coast of Florida and in the southeastern Gulf of Campeche. Gulf pink shrimp are commonly found on sand, silt, or mud bottoms as well as amongst shells. Juveniles inhabit nursery areas with marsh grasses and may overwinter in estuaries where they will bury deep in the sand and mud to protect themselves from the cold. As juveniles grow into adults, they will move offshore into deeper and saltier waters. Gulf pink shrimp are nocturnal and will bury themselves during the day and are much more active at night, especially around dusk. They are found at depths ranging from 6.5 to 300 feet (two to 70 meters) and exceptionally up to 755 feet deep (230 meters) – though they are most abundant around 36 and 118 feet deep (11 and 36 meters).

Pink shrimp is a kind of penaeid shrimp that is fast growing and has a short life span of less than two years. They tend to be fairly resilient to fishing pressure but are very dependent on favorable environmental conditions. The abundance of pink shrimp, which are found in the western Atlantic from Mexico to Maryland, varies greatly due to shrimp populations’ short-lived nature and differing environmental conditions. Severe winters can negatively impact their abundance. Although there was concern in past years about pink shrimp in the Gulf of Mexico and the south Atlantic being overfished, the stock in the south Atlantic has been declared rebuilt and there is now no indication that Gulf of Mexico pink shrimp are overfished.

Most pink shrimp caught in the U.S. come from Florida’s west coast, and they are mainly caught using bottom trawls, also called otter trawls. Some pink shrimp is also caught with butterfly nets and beam trawls. Bottom trawling is designed for maximum contact with the seafloor, and in this fishery the trawls frequently return to the same areas annually, causing great damage to shallow coastal areas. This trawling also releases nutrients into the water column, diminishing marine grass growth while increasing algal blooms. Overall, the effects of trawling on the habitat are a moderate concern in this fishery.

Bycatch in this shrimp fishery is high and includes finfish, sea turtles, and overfished red snapper. U.S. shrimp trawlers are required to use bycatch reduction devices that allow fish to escape fishing nets. They are also required to use turtle extruder devices (TEDs) that are designed to prevent turtle deaths. However, the U.S. National Marine Fisheries Service noted that in 2010 and 2011 the number of sea turtles stranded in the Gulf of Mexico spiked, possibly due to interactions with shrimp trawlers. Other species of concern include endangered smalltooth sawfish, endangered Atlantic sturgeon and overfished blacknosed shark.