Catfish has white, mild-tasting meat and is sold both fresh and frozen, most often as steaks, skinless and boneless fillets and fillet strips, and as whole dressed fish.  They tend to be processed immediately after being delivered live to a plant so freshness tends to be high. Stocks of catfish tend to be lowest during February or March, usually pushing prices higher then usual. Some processors have been known to abuse sodium tripolyphosphate solution, soaking catfish fillets in it to add moisture and weight, resulting in an inferior product and buyers should avoid fillets that are brown or gray in color.  Catfish from ponds containing a certain type of algae will have an off flavor, so buyers recommend making sure the processor conducts regular taste tests before harvest. 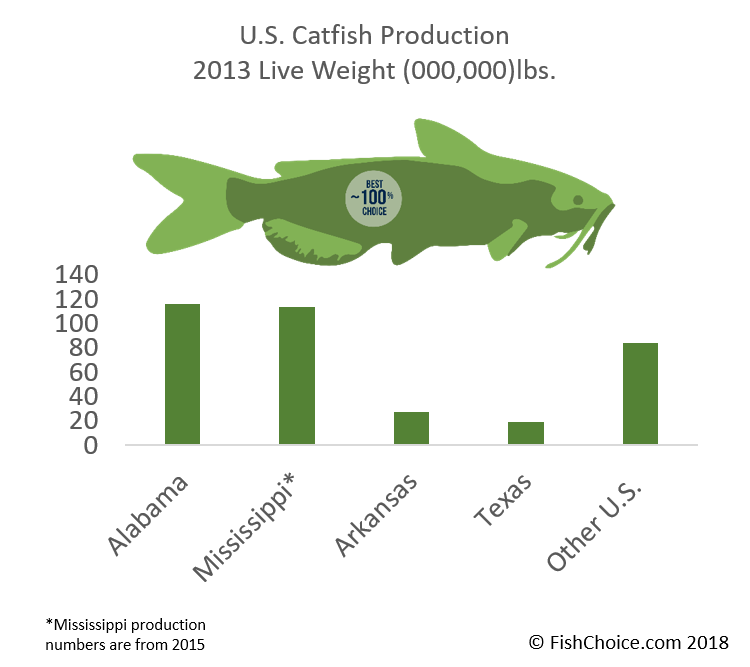 Key sustainability sourcing notes for farmed channel catfish based on the most recent 2017 Seafood Watch assessment are as follows:

Channel catfish are North America’s most abundant catfish species, and is the official fish of Kansas, Missouri, Iowa, Nebraska, and Tennessee. They are distinctive from other catfish due to their deeply forked tail and spotted body. They can grow to weigh more than 50 pounds; however, most are caught weighing up to 10 pounds. Most are between 12 to 24 inches long, although the largest recorded was 52 inches in length and weighed 58 pounds. Interestingly, catfish never stop growing; the older it is, the larger it will be.

Channel catfish spawn in the late spring or early summer. Males select nest sites in dark, secluded areas. Females deposit a gelatinous yellow egg mass at the bottom of the nest of 3,000 to 50,000 eggs, which the male guards for about a week until the eggs hatch. If the female comes near the nest after fertilization, she will eat the eggs. Fry remain in the nest with the father for another week. After another two to three weeks, the juveniles go their own way. They reach maturity in two or three years in captivity, and three to six years in the wild. The average lifespan of a catfish is 15 to 20 years.

Catfish are sometimes referred to as the “swimming tongue” because of their keen sense of taste. They have taste buds all over their external body surface, and inside their mouth, and as such, do not have scales. When the receptors are stimulated, particularly by amino acids released by prey, catfish barbells (whiskers) will move to orient the fish towards their food. They prey on a variety of foods, including terrestrial insects, minnows, shad, frogs, sunfish, crawfish, and freshwater drum. Large freshwater fish, such as flathead catfish and muskies, are predators to channel catfish.

Channel catfish are native to the southeastern United States and North America – ranging from the Gulf Coast states through the Mississippi Valley, north to Canada, and south to Mexico. They are now found nationwide as the species has been introduced into non-native rivers and lakes for sport fishing. As of 2017, channel catfish have been introduced in over 35 different countries primarily for aquaculture cultivation. In the wild, channel catfish inhabit freshwater, but are also known to survive in brackish water. They prefer clear water habitats with gravel, sand, or rubble bottoms in streams, lakes, and ponds. They will also tolerate mud-bottomed habitats.

-United States: Channel catfish are raised in large clay ponds on converted agricultural land, primarily in Mississippi, Alabama, Arkansas, and Louisiana. These manmade freshwater ponds are self-contained and get high marks from environmental groups because they discharge little waste and have limited chemical use. The New England Aquarium notes that harvest from the ponds is year-round with the use of a large mesh seine so the only fish caught are market-size. Although the ponds are self-contained and produce little waste, the regulation of catfish farm effluent disposal isn’t strong and the disposal isn’t closely monitored. Heavy rainfall can cause ponds to overflow, releasing effluent into neighboring watersheds.

-Southeast Asia: Suspended cages and ponds are used to grow tra. Since ponds tend to be further from waterways, pond culture is considered less polluting than cages and fenced areas. Ponds can also be a way to effectively recycle nutrients and organic matter. Tra are grown in net cages along rivers in Vietnam, Thailand, and China with little government regulation of the farming operations, according to the Environmental Defense Fund. Waste from the cages that pack Vietnam’s Mekong Delta is discharged directly into waterways, adding to the already poor water quality in the region.

Catfish farms draw predatory birds, which have been killed legally and illegally by farmers. In the United States, the National Wildlife Research Center has experimented with nonlethal methods to scare away double-crested cormorants, including robotic alligators and lasers, but nothing has resulted in a lasting solution. The Institute also cites evidence of increasing antibiotic resistance among tra, posing a threat to human health.

Channel catfish are omnivores that are fed mostly grain-based vegetarian diets. Tra grow quickly with feed containing low fish meal content, usually pellets made from inexpensive locally-caught bycatch, juveniles, and trash fish. In Vietnam, the trend is toward grain-based feeds like the ones used by American farmers.

Tra is one of two catfish species native to Southeast Asia and is the hardier of the two, enabling them to be raised in higher densities. Risk to Wild Stocks: Since channel catfish are native to the U.S., escapes are not an ecological problem, according to the Environmental Defense Fund.