Atlantic pollock is a member of the cod family but distinguished from cod by its greenish hue, paler belly, and brownish green back. Atlantic pollock are larger, slightly darker flesh, and have higher oil content than Alaskan pollock, which is actually a different species. Atlantic pollock is low in saturated fat and is an excellent source of protein, vitamin B12, phosphorus, and selenium. The flesh is firm and white, and has a sweet, delicate flavor. It is sold whole, in fillets, and steaks that are fresh, frozen, or smoked. 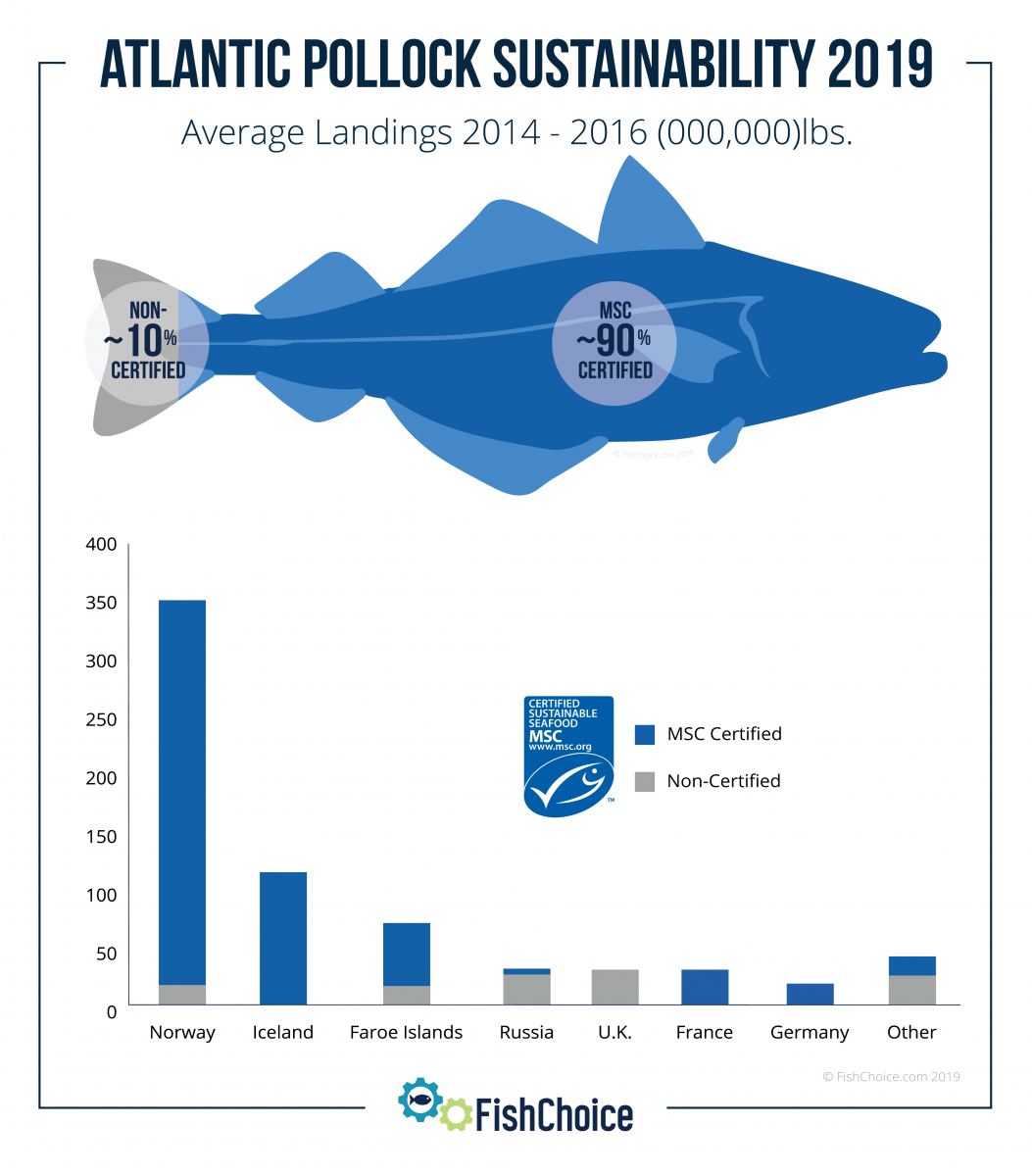 Key sustainability sourcing notes for Atlantic pollock based on landings from 2014-2016 and using the most current Seafood Watch ratings and several MSC certifications as of March, 2019:

Atlantic pollock are a member of the cod family, distinguishable by their greenish hue and darker flesh, and a small chin barbell similar to that of a catfish. Atlantic pollock grow quickly until they reach sexual maturity, which is typically between ages three and six. They live up to 23-years-old, growing more than three feet in length and weighing up to 35 pounds.

Atlantic pollock spawn on hard, stony, or rocky seafloor areas from November through February, spawning multiple times during one season. Once released and fertilized, the eggs rise into the water column to hatch. Adult Atlantic pollock have a closed swim bladder, which they naturally fill with gas to maintain buoyancy.

Smaller Atlantic pollock feed on small crustaceans and fish, while larger populations feed mainly on fish. They are visual hunters, foraging primarily in daylight. Atlantic pollock are prey to a variety of fish, including: spiny dogfish, monkfish, and other pollock.

Atlantic pollock are found throughout the coastal and continental shelf region of the North Atlantic. In the Northwest Atlantic, pollock range from Greenland to North Carolina in both inshore and offshore areas. Atlantic pollock swim in schools and are believed to travel extensively between the Scotian Shelf and Georges Bank and to a lesser extent, between the Scotian Shelf and Gulf of Maine. They are found at temperatures ranging from 0° to 10°C (32° to 50 ̊F) and depths to 400 meters. Pollock eggs and larvae are found in the water column, while juveniles inhabit inshore waters, moving offshore as they grow older and larger. When inshore, juveniles school in the open water at low tide, and then scatter and hide in intertidal seaweed beds during high tide. Adults live offshore and live in the water column although they can also be found near the ocean floor usually near sand, mud, rocks, and vegetation.

The most recent stock assessment suggests that research on Atlantic pollock is necessary in certain areas, including:

A bio-economic model “FishRent” has been developed to evaluate and forecast the impacts of management efforts. It integrates the economics of multiple fleets, impact of fishing on stock development, and the interplay of space and time between fleets and fish stocks to study the biological and economic effects of current operations.

NOAA Fisheries and the New England Fishery Management Council (NEFMC) manage the US Atlantic pollock fishery. Atlantic pollock have been managed under the Northeast Multispecies Fishery Management Plan since 1986. This collective plan covers 20 stocks from 13 different species. Grouping these species together allows the NEFMC to manage these mixed fisheries more effectively than if individually managed. Once decimated by overfishing in the 1980s and in the early 1990s, measures under the Northeast Multispecies Fishery Management Plan have allowed populations to rebound from overfishing. These measures include:

The Plan also establishes an optional catch share program for pollock and other New England groundfish. This program allows fishing vessels to fish together in sectors and allows fishers more control over when, where, and how they decide to fish as well as the ability to specifically target stocks that are not overfished. The catch share program exempts these sectors from many gear and area restrictions otherwise restricted to fishers outside the program. However, those sectors must stop fishing once their sector catches their predetermined allotment of fish. Fishers not in a sector or involved in the catch share must fish under regulations that limit the amount of groundfish they can catch, where they can fish, as well as the number of days they can fish.

New England fishers must also follow a number of management measures to reduce bycatch in the groundfish fishery including the Harbor Porpoise and Atlantic Large Whale Take Reduction Plans. These plans restrict where, when, and how gear can be set. In addition, these plans require the use of acoustic deterrent devices called “pingers” to prevent marine mammal entanglement in nets.

Atlantic pollock matures quickly and has high reproduction rates, which are characteristics that make its inherent vulnerability to fishing pressure low.

Although the Canadian pollock fishery was historically overfished, it is currently recovering. In the United States, the Atlantic pollock fishery is rather small but considered healthy. Norwegian pollock stocks are also stable and healthy. In Iceland, overfishing is occurring and the Atlantic pollock stock status is poor, according to the Monterey Bay Aquarium.

Bycatch levels in the Canadian, Norwegian, and Iceland pollock fisheries remain unknown, although the risk is considered to be moderate based on the gear used, according to the Monterey Bay Aquarium. Bottom gillnets risk ensnaring marine animals, and have been a high concern in both the U.S. and Canada due to documented incidents where protected species were caught. In addition, lost gillnets in the eastern Atlantic have entangled non-targeted fish long after they’ve been abandoned.

Management measures in the U.S. as well as the North Sea or Northeast Arctic regions of Norway are considered highly effective. They include area closures, size limits, gear restrictions, dockside monitoring, logbook reporting, catch quotas, and observer coverage. In Iceland and Canada, extensive management measures are in place but total allowable catch levels have still been set higher than scientific recommendations. Management effectiveness in these countries continues to be a moderate concern.