Soft-shell crab is usually shipped live, however it is common for the blue crab to perish in transit. Smell is the only real indicator of freshness, and any crab that has an odor resembling ammonia should not be served. Some buyers suggest that the summer peak is the best time to buy crab. Maryland's colder waters and estuaries produce a blue crab high in flavorable fat; Carolina blue crabs are considered second to Maryland; and Louisiana provides options for price sensitive customers who like a larger crab. The best way to store a soft-shell crab is in cool, moist packaging. While producers suggest that the shelf life for soft-shell crabs is 5 - 6 days that includes all of the shipping and processing time; In the Midwest a shelf life of 2 - 3 days can be expected; and on the West Coast a shelf life of 1 - 2 days can be expected. Soft-shells are split up into five grades; whales (5.5"+), jumbos (5"-5.5"), primes (4.5"-5"), hotels (4"-4.5") and mediums (3.5"-4"). 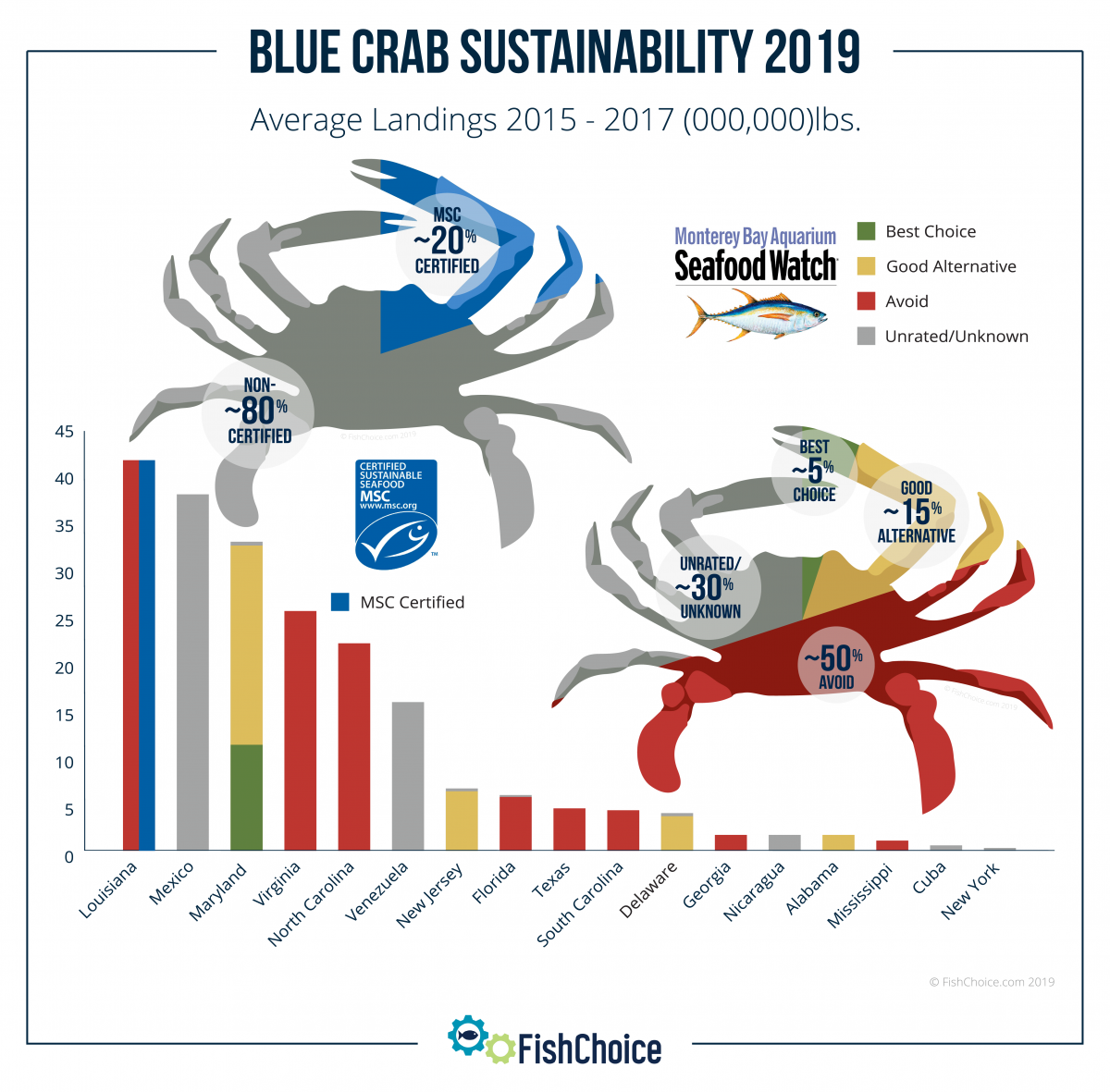 Key sustainability sourcing notes for blue crab based on landings data from 2015-2017 and the most recent Seafood Watch assessments and MSC certifications as of May, 2019:

Blue crabs range in color from gray to a dull blue-olive green color – with only their claws being a true blue. Mature females will have their claws tipped with a bright orange to red color. Their carapace (shell) has nine teeth on each side that are actually strong spines. Crabs have five sets of legs, including one set of front claws, three sets of walking legs, and one set of rear swimming legs. Males have a T-shaped abdomen, while females have a triangular-shaped abdomen that becomes more rounded as the female ages and matures. Males typically grow larger than females, and generally reach between five inches (the legal size for harvesting in the Chesapeake) and eight inches. Some males have been reported to grow to 10 inches in carapace length.

Blue crabs mate from May through October in the Chesapeake Bay. Before mating, males will often “cradle” the female in their legs and will carry her on their backs for several days while looking for a protected area to molt. Once the female molts, the pair mate. After mating, the male will continue to cradle the female until her shell hardens again. Females develop an external egg mass called a “sponge” which can contain anywhere from 75,000 to three million eggs. While females tend to only mate once in their lifetime, they can store sperm for multiple spawning’s. Eggs generally hatch within two weeks’ time and the currents will move the larvae offshore. Larvae will molt several times throughout their growth and will eventually move back inshore where they will grow from juveniles into adults. The frequency of molting tends to decrease as the crab grows and matures. Blue crabs typically reach maturity at around a year to 18 months and do not generally live past three years.

Croakers, red drum, fish-eating birds, sharks, rays, and sea turtles feed on blue crab. Blue crabs feed on pretty much anything they can find including a variety of bivalves, crustaceans, worms, fish, plants, detritus, dead fish and plants, and have even been known to cannibalize juvenile blue crabs.

Blue crabs are found in North America from Nova Scotia, Canada, south to Florida and through the Gulf of Mexico. Their southern range extends through Central America to Uruguay and Argentina in South America. Blue crabs occupy a variety of different habitats throughout their life, but are generally found along the seafloor in brackish coastal lagoons and estuaries. Their distribution varies depending on age, sex, and season. Larvae tend to occur in offshore, high salinity waters, eventually moving into estuaries, intertidal marshes, seagrass beds, and soft-sediment shorelines where they will grow and feed as juveniles and adults. Blue crabs are tolerant of a variety of temperatures and salinities.

Within the Chesapeake Bay, males prefer fresher waters in Maryland and the upper tributaries while females tend to prefer the saltier waters in the mainstem of the Bay and Virginia. Crabs conduct seasonal migrations and are abundant in the shallow waters and grass beds of the Chesapeake during warm weather, and will move to deeper water in the Bay during the winter. Females also move to higher-salinity waters to spawn.

As climate change continues to cause sea temperatures to rise, warmer water temperatures are expected to impact seagrass – habitats essential to juvenile blue crabs. Additionally, warmer waters are expected to impact the food web of which blue crabs play an essential role in as both a predator and prey species. Oysters and other bivalves that are preyed upon by blue crabs will become especially susceptible as the oceans absorb more carbon dioxide and the water becomes more acidic – which will weaken their shells and cause slower growth rates. More research is needed to better identify the impacts climate change will have on blue crab ecosystems and how these changes will impact the species.

A couple studies have been undertaken to identify the long-term effects of oil exposure – most recently and notably the Gulf of Mexico Deep Water Horizon spill – on blue crab physiology and populations. A 2010 study by the Louisiana Sea Grant program reviewed the routes of oil exposure and found blue crabs can either be directly exposed to oil or ingest it through contaminated food sources. While mortality and toxicity effects are not always immediate, oil exposure can cause long-term chronic effects and decrease reproductive rates as well as survival. While not always deadly, the contaminants from oil spills can also be passed down to offspring. Additionally, surface oil from the Deep Water Horizon spill contaminated offshore larval grounds and other important blue crab habitat. Studies regarding the long-term impact of the spill on the Gulf of Mexico are ongoing and are being carried out through the Natural Resource Damage Assessment Process.

Blue crab is one of the most significant commercial fisheries in the United States in terms of both economic value and in weight. Most landings occur in states waters, and as such, direct management responsibilities are carried out by the respective states – generally by the state’s natural resource department. As most blue crab are caught in state waters, regional fisheries management councils are not directly involved in management. While states enact their own management, federal laws regarding water quality, habitat protection, and pollution still apply to the blue crab fishery. In 2010 the majority of blue crab landings occurred in Maryland, Virginia, North Carolina, and Louisiana.

Even though blue crab management is regulated by the respective states in which they are caught, Maryland, Virginia, and the Potomac River Fisheries Commission work closely together to ensure a healthy blue crab fishery in the Chesapeake Bay – where their jurisdiction overlaps in estuarine waters – and are all signatories to the Chesapeake Bay Blue Crab Fishery Management Plan (FMP). The first FMP was implemented in 1989, and the second, revised FMP was implemented in 1997. Both plans have the same overarching goal of protecting the bay-wide stock while optimizing the long-term use of the resource. Management measures include: restrictions on the number of licenses, efforts to buy back unused licenses, gear restrictions, and protections for female crabs including setting female-specific harvest rates as well as reducing the number of female harvest licenses.

Where their jurisdiction overlaps in the Delaware Bay, Delaware and New Jersey also work collaboratively under the 1996 Delaware Bay Blue Crab FMP.

The North Carolina FMP for blue crab was first adopted in 1998 and has been amended a couple times since. The North Carolina FMP aims to maintain stock levels, promote harvest practices that minimize waste, protect and restore habitat, maintain the fishery as an economic resource, and promote research and education.

In the Gulf of Mexico, blue crab management is regulated by the respective states, but there is also a collaborative management effort between the states and the Gulf States Marine Fisheries Commission (GSMFC). While the GSMFC helps coordinate monitoring and management, and can make management recommendations, the individual states remain responsible for management decisions and enforcement. Under this effort, Gulf States must consider the impact of any changes to state regulations on neighboring states. Among recommendations the GSMFC has proposed that all Gulf States comply with include: minimum size limits (five inch carapace length), trap identification systems, restrictions that fishers must only attend traps during daylight hours, and data collection efforts.

Most states have derelict crab pot removal programs that prevent ghost fishing. Bycatch prevention regulations vary depending on the state. New Jersey, Delaware, and Maryland regulate the use of specific terrapin bycatch reduction measures and implement spatial restrictions within the fishery to protect terrapins.

Blue crabs, found along the U.S. Atlantic and Gulf Coasts, grow and reproduce quickly, making their inherent vulnerability to fishing pressure low. However, their abundance fluctuates greatly. Some populations have experienced a drastic decline due to habitat loss from coastal development and pollution. Blue crab fisheries in the Chesapeake Bay and parts of the Gulf of Mexico have shown a declining trend compared to historic levels. While not considered overfished, several states list the crabs as a species of concern.

These crabs are primarily caught using traps, which have a moderate effect on local habitats, depending on the area. They’re also caught with dredges and bottom trawls that can do great damage to marine habitats. Some blue crabs are caught with a series of baited droplines called trotlines, which are primarily set in sand and silt.

The main bycatch in this fishery consists of juveniles that can easily be released alive. Many states require crab pots to have escape rings to reduce this kind of bycatch. There are serious concerns about the catch of diamondback terrapins, which are considered endangered or a species of concern in every state where blue crabs are caught. Maryland, Delaware has strict measures to reduce the pot fishery's impacts on terrapins and Alabama has closed areas to crab fishing to reduce impacts on terrapins.

Blue crab is managed state-by-state and each one has regulations in place. These measures include area restrictions, minimum size limits, bycatch limits and gear restrictions. U.S. states have varying management effectiveness scores primarily due to the implementation, or lack thereof, of management measures to reduce terrapin interactions. Maryland, Delaware, and New Jersey all receive top ratings for management, and Alabama is considered moderately effective. Florida, Georgia, Louisiana, Mississippi, North Carolina, South Carolina, Texas, and Virginia are all identified as having ineffective management because there is no implementation of management measures to protect terrapins.