Coho salmon has rich, reddish-orange meat and has been called one of the best-tasting salmon. Although coho costs less than king and sockeye salmon, its quality is still quite high. Coho are a medium fatty salmon that have nearly two times the oil content of pink and chum salmon, but less than sockeyes or kings. Coho salmon are available primarily headed and gutted, in fillets both frozen and fresh in season from July to October. A limited amount of skinless, boneless coho salmon is sold. Coho is graded 2-4, 4-6, 6-9, and 9 up.

Like other kinds of salmon, coho salmon quality differs greatly depending on the run so buyers recommend learning about specific runs and their characteristics to identify the best salmon. Cohos caught by trolls and frozen at sea tend to have very high quality, although they have a higher price than coho salmon frozen on the shore, according to some buyers. 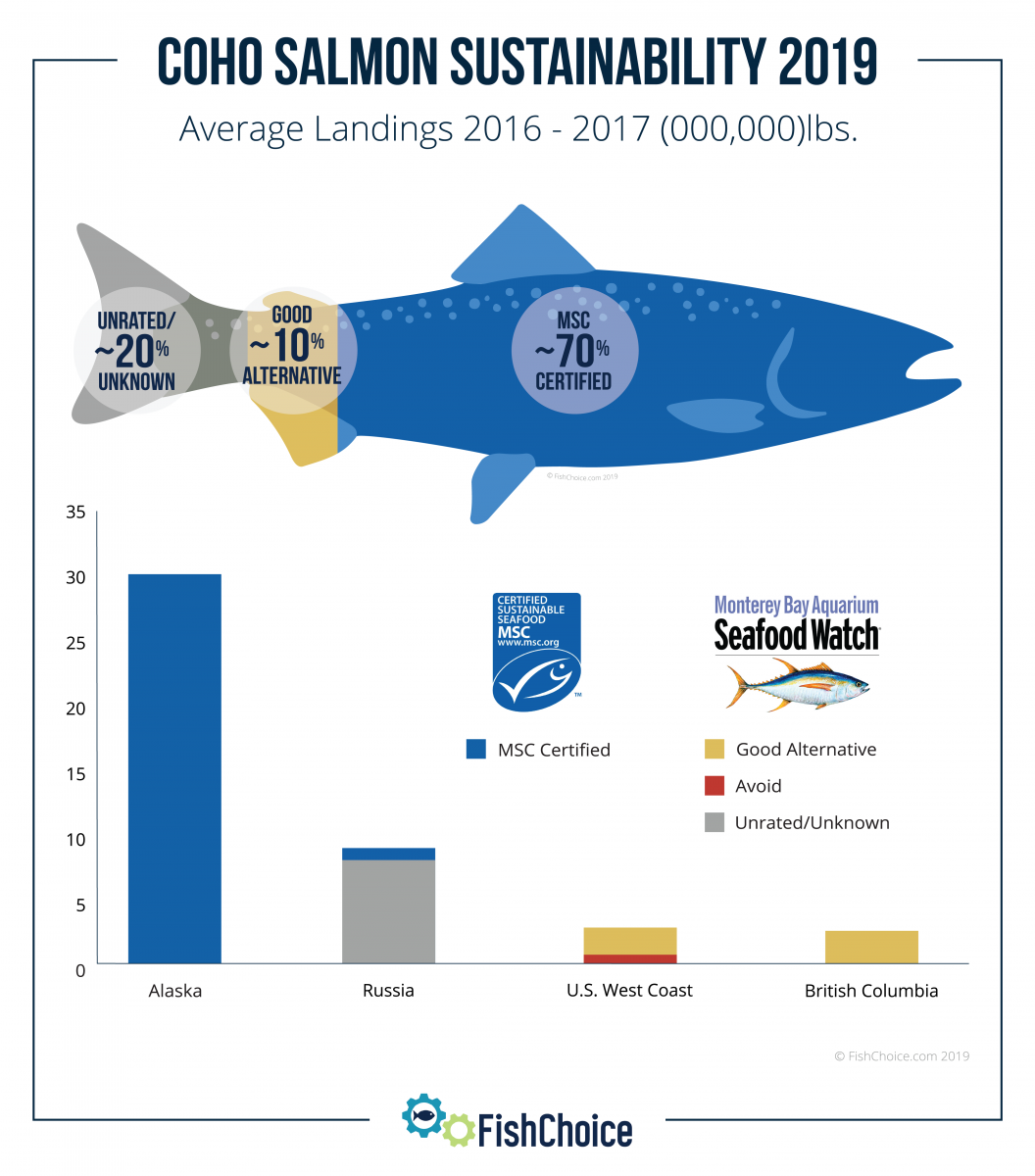 Key sustainability sourcing notes for coho salmon based on average global landings from 2016-2017 and using the most current Seafood Watch ratings and MSC certifications as of August, 2019:

Coho salmon are anadromous, meaning they hatch in freshwater and migrate to saltwater to feed and grow. Coho return to freshwater between the ages of three and four to spawn.

Female coho bury their eggs in dugout gravel nests called redds, and incubate them for six or seven weeks. The newly hatched coho salmon feed on plankton and insects. All adult coho die after spawning, and their carcasses provide a valuable source of energy and nutrients to the river ecosystem as a nitrogen and phosphorous source. This process also helps improve juvenile salmon growth and survival. Once the young mature, they migrate to the ocean and begin feeding on small fish. Coho salmon spend about 1.5 years in the ocean before returning to their natal streams or rivers in fall or early winter to spawn.

Coho salmon are distinguishable from other salmon species by the lighter pigment of their lower jaw gumline, the small black spots found on their back and tail while in the ocean, and their blue-green back and silver sides. Spawning males develop a hooked snout and large teeth. All spawning coho develop a darker pigment with reddish-brown colors on their sides. Juveniles migrating back to the sea lose their camouflaging parr marks to the dark back and light belly coloration synonymous of ocean coho. Adult coho salmon weigh up to 12 pounds and are 24-30 inches in length.

Coho salmon are found along the Pacific coast of North America from southern California to Alaska – being most abundant from southeast Alaska to central Oregon. Coho salmon are anadromous and will hatch and spend the early part of their lives (between one to two years) growing and feeding in freshwater environments such as rivers, streams, and associated wetlands. As they mature, adults will migrate out to the ocean to further feed and grow. Some stocks will migrate more than 1000 miles out to sea during this time while others will remain closer to the streams and rivers of their birth. Coho generally spend about 1.5 years feeding in the ocean after which they will return to the freshwater environments of their birth to spawn in the fall and early winter months. Coho salmon have been introduced into all the Great Lakes and in many landlocked reservoirs throughout the United States.

Coho salmon are also found on the other side of the Pacific Ocean from Japan to Russia. In Russia, they most occur from the Anadyr River basin to Sakhalin. Coho are also farmed in net pens in Chile and Japan.

The lab’s Ecosystem Monitoring and Assessment Program (EMA) monitors changes in large marine ecosystems of the North Pacific, and informs on changes in marine salmon growth, health, and abundance in relation to adult salmon returns. Goals of the EMA include:

NOAA Fisheries and the North Pacific Fishery Management Council manage the coho salmon fishery in Alaska under the Fishery Management Plan (FMP) for Salmon Fisheries in the EEZ off the Coast of Alaska. Alaska accounts for the majority of US and global coho harvest and the fishery is of significant commercial and cultural importance. All management of salmon fisheries occurring in federal waters – including commercial, recreational, and subsistence – is deferred to the State of Alaska. This helps to ensure that management remains consistent throughout the state as well as through the salmon’s range.

There are more than 20 different coho stocks in Alaska. Alaskan salmon fisheries are well managed and according to a 2012 assessment – Alaskan coho populations are near or above target populations. The Alaska Department of Fish and Game regulates the salmon fisheries in Alaska by setting escapement goals. These goals are in place to ensure that enough salmon escape the fishery and are able to successfully return to freshwater and spawn – replenishing the population. Each year, managers and scientists conduct in-season assessments to determine the number of salmon returning to freshwater to spawn. Based on these returns, harvest limits are set, and scientist and managers will monitor and record both catch and escapements in real time. When abundance is high and the number of fish returning is much higher than needed to meet escapement goals, harvest levels are set higher. When abundance is low, and catch levels are exceeding escapement goals, harvest levels are set lower and the fishery may close earlier than expected.

NOAA Fisheries and the Pacific Fisheries Management Council (PFMC) manage the coho salmon population along the US West Coast (Washington, Oregon, and California) under the Pacific Coast Salmon Plan. The PFMC reviews this plan annually by comparing the reports of the previous fishing season to the estimated abundance for the current year. Based on these reports a management plan is recommended by the PFMC for the upcoming fishing season – with final implementation to be carried out by NOAA Fisheries. State and tribal managers also use these recommendations to shape their own policies for inland fisheries. Specific management measures can vary by year depending on the seasons’ estimated abundance, but generally include:

The overall goal of these measures is to ensure that fishers can harvest the maximum amount of coho the fishery can support while preventing the overharvesting of the species and ensuring populations with low abundance can rebuild. The overall status of coho stocks in California, Oregon, and Washington varies. In 2013, many individual stocks were not considered overfished; however, the Central California Coast stock is listed as endangered, three stocks are considered threatened, and one is listed as a species of concern under the Endangered Species Act (ESA). As such, management of coho salmon must additionally comply with measures outlined under the ESA. Captive rearing of salmon in hatcheries supports nearly all coho fisheries.

The Pacific Salmon Commission helps coordinate management and research of shared international coho stocks between the US and Canada. The Commission is comprised of a sixteen-person body with four commissioners and four alternates representing the interest of commercial and recreational fishers as well as federal, state, and tribal governments from each country. The body was originally formed by the US and Canadian government to implement the Pacific Salmon Treaty. First ratified in 1985, the Pacific Salmon Treaty is a bilateral agreement that aims to prevent overfishing, provide optimal harvest, and ensure equal benefits of salmon production between the two countries. The US, along with Canada, Russia, Japan, and South Korea, is also a member of the North Pacific Anadromous Fish Commission. The primary goal of the Commission is to provide a mechanism for international cooperation of coho and other salmon species in the northern Pacific Ocean.

In addition to adhering to these commissions and treaties, coho salmon are managed by the Department of Fisheries and Oceans Canada (DFO) in Canada under: the Southern Pacific Salmon Integrated Fisheries Management Plan (IFMP) (covering waters south of Cape Caution, including the Fraser River watershed), the Northern Pacific Salmon IFMP (covering waters north of Cape Caution, including the Skeena River watershed) the Salmon Transboundary Rivers IFMP (covering the Alsek, Stikine, and Taku River watersheds), and the Wild Salmon Policy.

Coho salmon stocks differ by location. In Alaska, their populations are healthy. The Pacific Northwest populations include some healthy ones, but Seafood Watch recommends avoiding wild Columbia River Coho stock because that salmon is currently listed under the Endangered Species Act. Coho in central California and Interior Fraser, British Columbia, are also listed as endangered. Several others along the U.S. West Coast have threatened status, according to Seafood Watch.

Most Coho are caught by trollers and gill netters, with trollers accounting for about half the catch. A small amount is caught using purse seines. Trolling uses baited hooks and lines that don’t touch the seafloor. Gillnets and purse seines usually don’t have contact with the ocean floor either, so there is minimal impact.

Trolling results in low bycatch that’s primarily made up of non-targeted salmon species. The hooks enable bycatch to be released quickly with a high likelihood of survival. Bycatch of seabirds and porpoises can be high with the use of gillnets.

Alaskan salmon are extremely well managed with a number of conservation measures in place to protect species there, including a limited entry program and scientific monitoring. Canada’s Department of Fisheries has management measures in place to help strengthen Coho stocks, although abundance remains low in several areas. Similarly, federal efforts such as gear requirements, minimum size restrictions, quotas and seasonal limits apply to salmon fisheries in California, Washington and Oregon. A Seafood Watch report from 2016 noted that significant progress had been made in managing salmon along the U.S. West Coast. Despite the complicated presence of endangered species, Seafood Watch considered management of most of these salmon fisheries to be careful and highly effective.